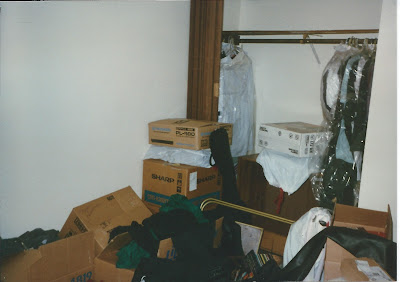 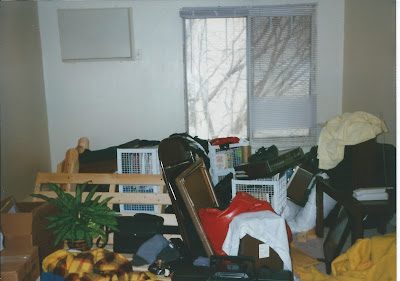 That's me and my friend Tai's stuff on the day we moved into our first apartment in Madison, Wisconsin. I'd graduated high school a semester early because I couldn't wait to get out of my hometown, Oak Park, Illinois, where my second novel, BALLADS OF SUBURBIA is set. I was dealing with a lot of the same things as my main character, Kara. As soon as I'd moved there in 3rd grade, I'd felt bullied and like I didn't fit in. By high school I was struggling with depression and self-injury, I had a lot of friends with drug problems, and especially after going through an abusive relationship, was afraid I might end up going down a really dark path if I didn't find some place to start fresh.

So Tai and I lived in a tiny one bedroom apartment with my cat, Sid. We worked crappy jobs, me at a grocery store and her at a gas station, but we spent the rest of the time listening to music, cooking delicious vegan food, writing (that is my old typewriter in the closet of the top picture, I couldn't even afford a computer at the time), making zines and collages, swinging and feeding the ducks at the little lakefront park a block from our house, and exploring the surrounding small towns late at night (which inspired the setting of the fictional town of Carlisle, Wisconsin in my first novel, I WANNA BE YOUR JOEY RAMONE). It was the perfect first taste of freedom and exactly what I needed to get past all the trauma and drama from childhood and high school. 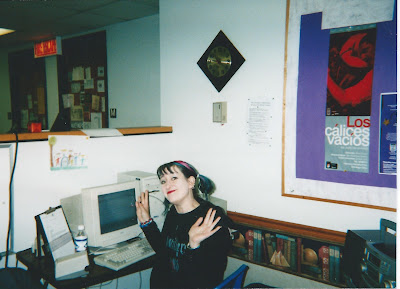 Okay, so that picture is probably actually taken in 2001 or 2002, but it's me in the Fiction Writing Department at Columbia College Chicago-- the place that probably had the biggest impact on my entire life.

After spending a little over half a year in Madison, I went to go to school in Ohio for a year for something other than writing even though I'd wanted to publish books since the age of 5. The attempt to go against my dream went sour and I decided to drop out, move back to Madison, and just get a crappy job and "be a writer". (There was also a boy involved in this decision-making.) Unfortunately my idea of being a writer involved a lot of drinking and drugs ala Hunter S. Thompson and William Burroughs, which was not very productive for me. My life started to spiral out of control, but I caught myself and decided to go back to school for what I really loved--fiction writing--even if it meant returning to the suburbs to live with my mom.

Columbia was the most creative and productive environment I'd ever been in, which is why I say to aspiring teen writers, if you want to go to college for writing, do it! You can still get "real jobs" with a writing degree and it's an incredible opportunity to spend four--or if you get your Master's like me, six years doing what you love. I wrote IWBYJR, started BALLADS and met my first agent while I was at Columbia. I also had another new beginning, buying my first house in 2004, when I was 24.

There have been some other new beginnings since then--selling my first book, getting married, writing the beginnings to three other books, two of which are being shopped and the other which I am hoping to finish in the next month or so before my next fresh start/new beginning... 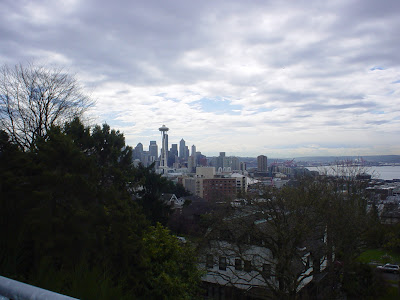 I fell in love with Seattle when I first visited in 2004 with a group of friends/fellow Nirvana fans. We were there to honor Kurt Cobain ten years after he died and I was really just expecting it to be a trip where I got to be a music geek and hang out with my friends. However, just riding the bus from the airport to our hostel, I was overwhelmed by the beauty of the Pacific Northwest and as soon as I started walking around the city, I had a feeling I've never had before, never in the Chicago area, and not even to such a degree in Madison--my heart was home.

For the past nine years I've taken annual trips to Seattle, using it as a place to recharge. Now, after struggling with the state of my writing career for four years, I've decided to make the place that has always felt like home into my ultimate fresh start. It's terrifying in some ways because like when I went to Madison, I just have some savings, no job lined up. However, this time around I'm a proper grown-up and this is going to be a much bigger and more expensive move (I have wayyyyyyy more stuff than in those pictures shown above). It's a risk I have to take, though. When I chose to live my dream by going to school for writing, it paid off and now I have to hope this dream will do the same. Maybe it will help change the luck I've had with publishing lately or maybe because I'll be searching for a full-time job (hopefully in teaching or writing), it will change my priorities a bit and my focus will be more on the essays I write for magazines like Rookie (which comprise most of the links in this blog post). We will see, but I'm excited and so ready for this adventure/fresh-start/new beginning.

Now I just have to work on some endings, like finishing the book I'm working on, and more unpleasantly, packing.

What big leaps have you taken or are you thinking about taking to give yourself a new beginning or fresh start?

Posted by Stephanie Kuehnert at 9:00 AM