Prone to Crushes on Boys in Books (Patty Blount) 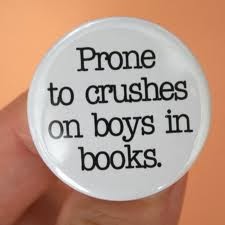 I fall in love with nearly every character I read. They leap off their pages to snag my heart and I swear eternal loyalty to each until the next book and then it starts all over again. And it's not just books. I've had imaginary love affairs with FBI agents (The X-Files), castaways (Lost), hunters (Supernatural) and firefighters (Chicago Fire). I wanted Nancy Drew's boyfriend, Ned, and when that didn't work out, I had a little thing for Joe Hardy. Or was it Frank?

These days, I want desperately to meet Roarke in 2060 (Eve Dallas books), or squeeze Levi Cooper's biceps ("The Best Man"). I just got a sneak preview of "The Wedding Secret" and am now oh! so devoted to Kevin Rossi. You'll see why in May, when the book is released!

But there's one character I can't stop thinking about, one character whose golden eyes enthralled me long before Twilight. His name is Jin-Thomas Clarke and he's mine.

No, no, I mean he's literally mine.

In the first contemporary romance I ever wrote, Thomas is the investigative journalist from London sent to the States to cover what he believes is a story that doesn't deserve his attention -- the plight of illegal immigrants. He meets a fiesty doctor whose free clinic that cares for these folks is shut down after an outbreak kills three men. Together, they soon discover the outbreak isn't an outbreak at all... it's murder. In the middle of all this, he struggles to keep his heart hard but falls for the doctor, only to break hers trying to save her life.

The novel is called Borderlines and though it isn't published, I'm so proud of it because this is the project that convinced me I could do this. I could be a writer. As soon as I typed "The End," I emailed the manuscript to my mom. A few weeks later, she called me and ordered me to turn on Dancing With the Stars. I did and to my utter amazement, there was Jin-Thomas Clarke -- a figment of my imagination -- dancing with Cheryl Burke.

It turned out the actor dancing with Cheryl was an actor I'd never heard of -- a man named Gilles Marini. As I sat there with my jaw dangling, Mom kept saying "He could play Thomas if Borderlines were a movie."

There are a few differences. Thomas has hazel eyes, a sexy British accent, and long black hair he wears in a ponytail. Gilles Marini has a sexy French accent and has amazing hot chocolate brown eyes and no ponytail. Yet, there's something about Gilles, the way he moves, the way he grins, the way he carries himself, the way he kisses (I have a vivid imagination) that IS my Thomas come to life. Seeing Gilles taught me that I can craft a compelling character, a character who leaps off the page and into a reader's -- or an author's -- heart.

Since the day I first saw Gilles dance, I stalk follow him online and have become one of his biggest fans. He was the Naked Shower Neighbor in the Sex & the City movie. He's been on Brothers & Sisters, Switched at Birth, and Two Broke Girls. I've stayed up late to watch whatever talk show he appears on and look forward to the day he visits Long Island so I can hug meet him in person. He once tweeted me and I couldn't stop smiling that day. Maybe one day, he'll buy one of my books for his children and I will faint.

There have been other books since Borderlines -- books I've written and countless more that I've read. And while I still lose my heart to every hero who comes my way, there's always a piece that forever belongs to Thomas, the first hero I dreamed up.

Oh, who am I kidding? There's a part of me that belongs to Gilles Marini, too!  *winks*

Have you ever seen a real person whose resemblance to a fictional character sort of punched you in the heart? Tell me!
Posted by Patty Blount at 12:00 AM