The Mask That Nearly Killed Me - by Delilah S. Dawson

When I was little, my dad had this creeper mask. It was fleshy and rubbery and made him look like an insane, bald, undead chainsaw murderer. And I loved the mask. But I hated the mask, too.

He originally bought it so that he could jump around the corner of our house on Halloween while holding a running chainsaw, which is something people actually did in the eighties. It still had a chain and could've cut a trick-or-treater to ribbons--or my dad, if he'd tripped. Wearing overalls, a plaid shirt, gloves, and this mask, he couldn't wait to terrify other kids. Or me.

So one day, I was at the kitchen table with my mom at dinner. We were eating chicken, mashed potatoes, and green beans. My dad was late to dinner, so we started without him. And then he came barreling into the room in that mask, and I screamed, and I ferociously picked up my butter knife and threw a handful of green beans at him.

And one of the green beans got stuck in the mask's mouth.

It looked like the scary bald axe murderer was smoking a canned green bean.

And I laughed so hard that I sucked a green bean into my windpipe and choked.

But the Heimlich didn't work. So my dad, still in the mask, still smoking a green bean, picked me up, turned me upside down, held me by one tiny foot, and pounded me on the back until the green bean flew back out.

But from then on, I knew the difference between "this is fun" scared and "I can't breathe and I'm dying" scared. I started watching scary things on purpose, sneaking downstairs when my parents were watching JAWS or Piranha on TV or borrowing my mom's copy of Pet Sematary to read when I was ten and she said it was the scariest book ever. I went to slumber parties to watch Amityville Horror and The Exorcist. I worked at a haunted house and was never so proud as the day I made that blowhard pee himself when he just had to insist the body bags weren't real.

They were real, and I was in one of them, covered in fake blood. Surprise!

Looking back, my dad's mask is one of the definitive reasons for why I write dark books. For lots of us, life gets scary all too early. Whether because our home lives are less than ideal or we have to deal with terrifying situations, there's a comfortable sort of glee about *choosing* to be scared when there's no real threat. It's almost like practice, like a kid turning and turning the little crank on a Jack-in-the-Box, scared that the clown will pop out again but excited that the clown will pop out again, too.

Servants of the Storm is about masks, about how the people you've known all your life might be hiding something sinister. And Dovey is the kind of heroine who, faced with an unmasked monster, picks up her butter knife and prepares to fight. I love unmasking the monsters after shrouding them in mystery and creepiness. I love the freedom of horror, of writing an abandoned amusement part that still inexplicably runs or a Basset hound that's really a demon or a restaurant where the barbecue doesn't quite taste like pig--all of which are in the book.

And I love the irony: I was almost killed by a mask, and now I write stories about them.

And my dad? Still has that mask. 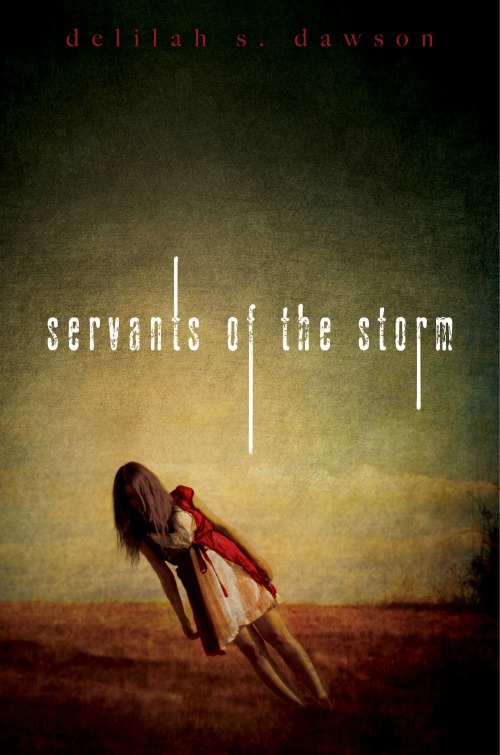 Servants of the Storm is a great October read if you're into Southern Gothic Horror set in Savannah, Georgia.

And the recipe for homemade blood is corn syrup and red food coloring. :)