The Bumpy Road to Love 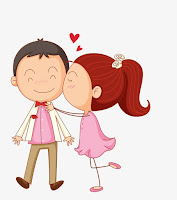 It’s February, and that means love is in the air--especially here at YAOTL. With love as this month’s theme, I thought I’d go all meta and write about writing about love.
You know that old saying, I hate to write, but I love having written? Yeah, well, I’m kind of that way about love. Writing relationships can be awfully tricky. Writing an action scene is easy in comparison. Joe walks down street. Joe slips on a banana peel. Whoops, *bang.* He’s on his butt. Simple, moves the story along, all external.
But a love story, that’s pretty much all internal. It intertwines with, and is an integral part of, the character’s journey, changing and progressing as the character changes and progresses. That’s the tricky stuff, the believable evolution from the first meet to the blossoming of attraction and the “does he just like me or does he *like* like me?” to the emotions engendered by the first kiss and the realization that this, this is the real thing, and finally, the happy ending.
Then there’s the external stuff, which is also tricky, but much more fun to write, because you get to torture your characters. Seriously, we can’t just let our characters sail off into the heart-shaped sunset after the first kiss. We need to hit them with a boatload of roadblocks and obstacles to impede their journey. There’s a reason the “boy meets girl” plot doesn’t just jump to “and they lived happily ever after.” That would be boring (and a damned short book). Boy meets girl, boy gets girl, and then he must lose girl (sometimes several times), before he rushes to the airport at the last moment before her flight departs and she’s gone forever to get her back again.
This obstacle-throwing can be done in a million ways, some creative and unique, some trope-y and cliché, but most of them will work for your reader (with the exceptions of maybe amnesia and the plain old misunderstanding that can be cleared up in a five second conversation or text), as long as your characters are together at the end.
In my writing, I prefer to take the star-crossed lovers separated by circumstances road-blocking route. For example, in my completed manuscript, THE NASCENT BLOOM (YA SciFi) the hero and heroine live in a strictly-controlled society separated by race and class. On a school field trip to a nearby moon, they’re captured by space pirates and sold into bondage on a faraway planet. Separated again, they find a way to get together and plot their escape. And they fall in love. Their love is taboo on their home planet, and that’s a big mental roadblock to get around. It doesn’t get solved easily. I toss as many bumps into the path of true love as I do into their struggle to escape. Only when they  each accept breaking every law that’s been drummed into them since they were kids can they declare their love for each other.
I put up a different, but still insurmountable, roadblock to happily ever after in my WWII-set time travel BERY BLUE, TIME COP. Modern day librarian Beryl meets a time cop from the future, who sends her back to 1943. Her mission? Stop a rogue time traveller from killing a seemingly random GI on weekend leave and messing up the timeline forever.
I’ve given Beryl a full plate. She’s frantically trying to figure out all the external stuff--how to stop a killer, why she’s the only one in all of time who can do this job, and how to protect a gruff, stubborn sergeant who clearly doesn’t want to be protected. I’ve also given her trust and abandonment issues that keep her from letting anyone in. And now, for the first time in her life, she’s fallen in love--pulse-pounding, dizzy-making, irrational-thinking, happily ever after in love (Beryl’s words, not mine). The problem? If she can save the sergeant's life, if she can keep the timeline from being completely fouled up, she’ll return to her own time and never see him again.
*Sniffle...* Will those crazy kids find a way to bridge time and be together? Well, of course, but there will be a lot more misery before that happens.
So, I guess you get the idea. Throw it all at your lovers, make them clear the path of those roadblocks and obstacles, make them work for that happy ending--but absolutely give them that heart-shaped sunset. With fireworks. And a kiss. Your characters may not love you for it, but your readers sure will.
💘💘💘
Janet Raye Stevens writes about love and all kinds of other mushy stuff. Connect with Janet at http://janetrayestevens.com/
Posted by Janet Raye Stevens at 3:00 AM