NaNoWriMo Helps Writers to Find Their Own Balance--Kimberly Sabatini

NaNoWriMo helps writers to find their own balance. 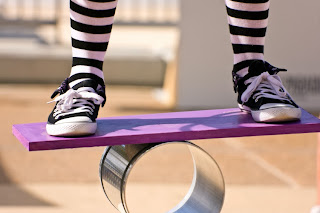 Just to briefly recap, this is my second year participating in NaNoWriMo or National Novel Writing Month. Oddly enough, I'm working on the same manuscript this year as the year before. Last year I took my fledgling idea (a year and a half in the mental marinade) and wrote just under 6,000 words.

I can tell you why I didn't write prolifically in the 2012 NaNoWriMo. I have legit-ish reasons. I had to prioritize the revision of another novel. I was still pretty convinced I was too busy in November to ever make this work. Soccer games were winding down, there was the holidays and even a dance recital. But the most problematic was my thought threads. They had not marinated long enough for me to weave a viable story. Yes, I know I'd been mulling this stuff over for a l-o-n-g time, but I didn't have enough deep questions to truly fuel the writing. For me, that's what writing is, a personal exploration. And in the end, I just stopped typing because it didn't feel like it was working. It was too thin.

Having said that, this may come as a surprise, but I was thrilled with my progress. Those were almost 6,000 words I never would have written if I'd been left to my own devices. It empowered me. I didn't see my NaNo adventure as a failure, but rather as a dry run for future success. After NaNo was over, I began to read and listen and think and wonder. In my head I was expanding on those 6,000 words. I spent lovely amounts of free time with my imagination. I used different parts of my day for different things. There was a time to revise and blog and work on other projects and then to day dream. The year flew by.

Now, here I am, starting fresh and I'm right on target with my word count for the first week. I've thought and planned and I have all the threads I need to begin weaving a real story. I've done all the right things to increase my likelihood of NaNo success this year. Yay! But wait, something is nagging at me. When I started this blog on balance, I thought for sure I'd be writing about how, year-to-year, my writing needs change. How perhaps next year, I won't have an idea marinated well enough to write more than those 6,000 words. I was going to tell you about how it's okay to balance you life with NaNo the best you can, but you shouldn't be discouraged if you have revisions due or a brand new baby mucking it up. (Seriously--I love mucky babies.) But as I was organizing these thoughts, I realized I wasn't comfortable with the contradiction I saw rising to the surface. This year I'm MUCH busier than I was last year, yet I'm producing much more writing and it's better. And maybe that's related to having more content at my finger tips. Or maybe I have better Halloween candy to steal from my kids this year. Ya know--brain fuel. Or maybe I've been coming at this wrong. Perhaps I've missed the true purpose of this writing adventure.

I'm now beginning to think that NaNoWriMo helps writers to FIND THEIR OWN BALANCE.

Writing is, at it's core, about growth and change over time. I'm beginning to think of NaNoWriMo as a sort of simulation for the writing life, meant to jump start emotional and technical growth. I can't make predictions on what my current and future NaNoWriMo outcomes are going to be, there are too many unknowns. But I can tell you the things that have come into greater clarity and balance just because I have participated...

How NaNoWriMo helped Kim to get her balance back.

*I've learned it's to my advantage to have daily writing goals and to utilize the support, enthusiasm and built in accountability of NaNo. The world is a distracting place. Hell, my lap top is a mine field of social media sirens trying to wreck me. I've learned I can and should write more on a regular basis. This is a HUGE lesson and because of my participation in NaNoWriMo, I have learned it sooner and without as much angst as if I'd had to learn it under contract.

*I've also figured out that a publishing schedule is not an artistic and personal growth schedule. This makes my hands and feet sweat. Good writers--great writers--are turning over material on a regular basis. But they are also turning in incredible material. I want to be a great writer. I want to write great stuff in a very timely manner. But look at me. Am I methodical and thoughtful? Or am I procrastinating and scattered? I don't know! It's a fine freaking line. But, NaNo has made me realize  there MUST be a balance. Excellence should never be compromised. A crappy book is just as problematic as a slow one. But writing generates more writing. NaNoWriMo has taught me that if the words aren't ready, they don't have to be used, but they don't have to be wasted either--they can become the stepping stone to better words. They can be for practice, they can be a spark or they can be for personal enlightenment. Empty pages can't be anything useful.

*I've unfortunately discovered that as a writer, I will never feel a true sense of balance. To be a writer is to spend a huge amount of your life feeling uncomfortable. Think of NaNoWriMo as a vaccination of writerly chaos. What happens if you try NaNo and fail? As far as I can tell, you don't earn bragging rights and you learn something about yourself--that's more benefit than downside. There's this story about a frog that I find creeps up on me at the oddest moments. It goes like this... If you drop a frog into a pot of boiling water, the smart little froggy will jump right out because the water is way too hot. But, if you place a frog into a pot of cool water and up the temperature one degree at a time, that poor little frog will… I'll let you use your imagination. We aren't those frogs. We're crazier than that. Writers want to boil. We want to burn bright like white hot stars. We don't want to get out of the water--we want to sizzle with success. But this means slowly inoculating ourselves to the heat of a writing life. NaNoWriMo is a very safe and fun way to turn the temperature up a degree on our own writing growth.

*I've learned, or should I say I'm reminded, that fear is stupid. I say reminded because I know that fear is stupid, but chose to forget it on a semi-regular basis. Fear is a defense mechanism. It's designed to save our lives if we're in a life threatening situation. Fear is stupid when it stops us from doing things out of possible embarrassment. Aside from those times that fear has saved my life (they've been so far and few between and I can't name one off the top of my head) fear has done nothing constructive for me. It's only stopped me from being happier, healthier and more successful. In fact, every time I've ratcheted up enough courage to do something that has previously paralyzed me, I've come out on the other side to a better place. I've actually said to myself--YOU'RE A DUMB ASS. YOU COULD HAVE BEEN DOING THIS ALL ALONG. NaNoWriMo won't cure all your fears, but I do believe when you successfully overcome some of your speed bumps, you're a lot more likely to take risks with some of the others. Totally not a bad thing.

I could go on, but I'd rather you jump in and tell me what lessons of balance you've learned from participating in NaNoWriMo. What things have stopped you from jumping into NaNo with both feet? Planning on doing it next year? What would you like to get out of it? Are you still thinking about that frog story? I am.