The Silver Crown, a book I loved

"She had known all along that she was a queen, and now the crown proved it. It was the first thing she saw when she opened her eyes; it lay beside her on the pillow, shiner than silver, glowing softly, with twinkling blue stones set all around. And although it looked hard and solid, when she touched it she discovered that the silvery metal was actually a finely spun fabric, strong but soft as silk, so that if she wanted to, she could fold the whole crown in the palm of her hand and tuck it in her pocket."

The girl's name is Ellen and she has just turned 10. Is her crown magic?  It had better be, because her house is burned down just a few pages later, along with her family (spoiler alert: or so the reader is lead to believe).  She witnesses a murder and learns that a policeman who was trying to help her is also killed, leaving her on her own.  All this happens by page 23.  Can you see why I was hooked?

And that doesn't even address the silver crown, and why she got it, and whether she can use its magic to thwart the powers of darkness.

Plus there's a great twist where a man claims to be a policeman and gets her in a car and she later realizes he's actually the bad guy (I totally stole that for Girl, Stolen).

I loved that book with a passion. It taps into the same fantasy that Harry Potter and dozens of other books have - that you are secretly possessed of powers that no one knows about - not even yourself!

But here's the bad part about my story:  I loved that book so much that I stole it.  From my grade school! I was helping in the library after school and I hid it in my belongings and just walked out with it.  (About 20 years later, I sent them a check that would cover the purchase of quite a few books.) I could claim poverty (we often had holes in our shoes) but I think it was the sheer desire to possess it.

A Twist to the Tale

To hide my crime, I pasted this bookplate in.  I haven't opened this book since I read it to my own daughter eight or nine years ago.  At that time, I don't think I remarked on the bookplate at all.  Tonight, though, I stared at it and realized what it was.  Proof that I did have a short story published by Puffin Post. 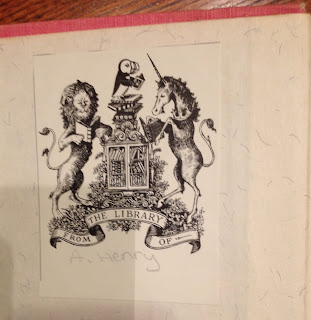 See, I grew up in a small logging town in Southern Oregon, where there was little to do if you didn't like to hunt and fish. I practically lived at the Carnegie-funded library. In grade school, I started to write my own stories.

One was about a six-foot-tall frog named Herman who loved peanut butter. I decided it would appeal to Roald Dahl, the author of my beloved Charlie and The Chocolate Factory. My father had told me that you could write to authors care of their publishers. So I sent off my story - carefully printed in pencil on wide-ruled paper - to the address printed just inside the front cover.

And it did actually find its way to Dahl in England. He sent me back a postcard. It's dated 24th August '72, and says, "Dear April, I loved your story about Herman the frog. I read it aloud to my daughter, Ophelia, who also loved it. I read it to my secretary, Hazel, who giggled. Lots of love, Roald Dahl."' 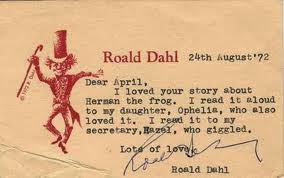 Somehow I've managed to hold onto this postcard for more than 40 years. It's amazing that he committed this act of kindness for one of what must surely have been a flood of scribbled missives.

Dahl even shared the story with the editor of the Puffin Post, a British children's magazine. She contacted me and asked to publish it.

At least that's how I remember it. I don't have the magazine any more or her letter or anything.  I've tried to buy old issues when they surface on eBay, but have not found the right one.  Until tonight, I thought I had no proof that this ever happened.  I was beginning to doubt my memories.

But that is an official Puffin Club book plate - and the Puffin Club was only in England.

It's inspired me to renew my search. (Any readers out there in London?)