Cockroaches (shiver) On My Wall by Jody Casella

This morning as I was blearily making my coffee, I saw, out of the corner of my eye, SOMETHING skittering across my counter.

As I write this post, WHATEVER THAT SOMETHING IS is still there and I am waiting patiently for my husband to wake up and smash that something dead.

In the meantime, I am ready. With a plastic bucket. And some tape...

I could tell you about my fears. The usual. Scary movies. Storms. The big one: death. Or worse, the deaths of people I love.

But instead I would like to tell you about the summer I lived in a dumpy apartment in Memphis that was infested with cockroaches.

When I moved into that apartment the summer between my junior and senior year, I was feeling very grown up. I had lived in Connecticut, which for the record, is 1250 miles away from Memphis. That summer I took two jobs. A very cool internship downtown at Memphis Magazine. And a super gross nighttime job waiting tables at Perkins Restaurant (I still have nightmares about this job. Most of these nightmares consist of a demented hostess seating table after table in my section and grinning maniacally while I race around like a lunatic trying to give everyone water. This was a directive at Perkins. You must greet customers by giving them water within 45 seconds.)

But back to my story.

I was feeling proud and independent and also, defiant with a dash of guilt. My roommate was a guy. Gasp. We were just friends but once upon a time I was a Catholic school girl, so it was a bit of a scandal (For more on THAT story, see here)

The night I moved into the apartment, I was with my friend Patti. We had finished setting up my belongings--not much--a suitcase, a futon, a plastic shelf with a few books--and had collapsed onto the couch, when we SAW it. A winged three-inch-long cockroach skittering up the kitchen wall.

The one on my kitchen wall paused at face level.

Patti and I were both afraid to smush it. The fear, of course, is that it would fly at us and get caught in our hair. For a tense few minutes we--Patti, me and the cockroach--looked at each other and twitched nervously. Patti noticed a plastic cleaning bucket on the floor near the sink and she suggested that I pick up the bucket and run at the wall where the cockroach was.

"Because this is your apartment," said Patti, grinning maniacally.

I picked up the bucket. I ran toward the cockroach. I smacked the bucket on the wall around the hideous twitchy body. It occurred to me at this point that if I did try to slide the bucket down to the floor, the cockroach would likely fly at my feet and skitter up my leg.

Patti's next brilliant idea was to tape the bucket to the wall and leave it until my roommate, the guy, moved in and he could deal with it.

She scrounged around looking for tape. This was a sublet, furnished apartment so everything in it belonged to someone else. By the time Patti found the tape, my arms were hurting from holding up the bucket.

We taped the bucket securely and left it there. When the guy moved in a few days later and wondered why there was a bucket taped to the kitchen wall, I explained the situation and added that it was my hope that he would take care of the problem.

He didn't really like this idea, and the bucket remained where it was for the rest of the summer. Some nights when I returned home from Perkins and collapsed on the couch in my smelly greasy polyester uniform, I'd look at the bucket on the wall and shiver. But mostly, I forgot about it and went on with my life.

I wish I could say something philosophical and deeply meaningful here. Something about accepting our fears. About independence. About stereotypical gender roles and the killing of insects. About cruelty to all of God's creatures.

But I've got nothing.

At the end of the summer my roommate grew a pair and carefully removed the bucket from the wall. The cockroach was still alive and twitching. I screamed. My roommate expressed surprised.

He opened the door, and the cockroach flew off into the night. 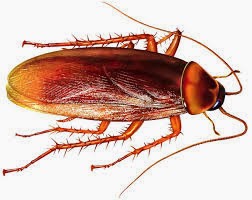 Email ThisBlogThis!Share to TwitterShare to FacebookShare to Pinterest
Labels: buckets taped to the wall, cockroaches