First of all, please forgive any errors in this post, as I had surgery this week and am on painkillers. That's kind of like being on a roller coaster, right? Wheeeee!

So, see this book? 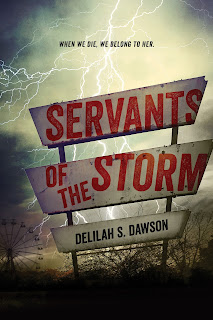 It was inspired by this photoset of Six Flags New Orleans after Hurricane Katrina. I was so fascinated by the abandoned amusement park that I had to write a book about it, although I did move the story to Savannah and make up my own hurricane.

There's always been something sinister about amusement parks to me. Something secretive simmering just under the surface. When I was a little kid, I had this sneaking suspicion that they were rigged to kill every tenth kid or so. That the climbing net would drop me into gator-filled water or my airplane would detach and just zoom off into the trees. I even thought Spaceship Earth at Epcot was secretly a death trap, and when my mom and I were in the last cart, I would've bet every dollar I owned that our cart was going to disconnect and roll backwards into the darkness. When that actually happened as part of The Maelstrom in Epcot, I triumphantly shouted, "SEE? IT'S HAPPENING! I TOLD YOU SO! WE'RE ALL GOING TO DIE!"

The thing is-- no one bothered to explain things like "statistics" and "insurance" and "news" to me at the time. And my imagination got away from me. When I was a kid, that was a problem. But as an adult and a writer, I know just how to channel those fears into my books.

When I was writing Servants of the Storm, I had a lot of fun crafting the pivotal scene that takes place at Riverfest, an amusement park destroyed by Hurricane Josephine. I got to put every fear and worry I'd ever had at an amusement park into my heroine, Dovey. She's the only one who can see the truth, just as I thought I was the only one who saw the truth. The rattling bolts, the rusted chains, the dead-eyed workers, that little hitch right before the Free Fall drops you...

Of course, now that I'm married to a statistician, I know how safe the rides are. But that doesn't stop me from checking and rechecking the chain across my lap or worrying that the harness will flap open at the worst possible time. That's part of the fun.

Still, I dare you to read Servants of the Storm, now out in paperback with that shiny new cover, and not scream when you're headed down that first big hill.

Or pushing the buttons.

Delilah S. Dawson is the author of HIT, Servants of the Storm, the Blud series, and the upcoming Wake of Vultures as Lila Bowen.
Posted by delilah s. dawson at 11:03 AM