I have this love/hate thing with amusement parks.

I love Disneyworld. It is indeed the happiest place on earth! Leave a wake up call at a Disney hotel and It's a Small World plays in your ear when you pick up the phone. There are parades! and rides! and Mickey ice cream bars! Disney princesses! More rides! Mouse ears! More rides! You can park hop from land to land and then go back to your hotel and there's a lovely pool! The first time we took my son, he smiled for four days. I mean what is not to LOVE?

We don't have an amusement park here in Houston anymore since Six Flags closed, but we can drive to San Antonio and go to Fiesta and Sea World and did you know that you can do this behind the scenes thing where you learn how to train and swim with the sea lions? It was honestly the best excessive amount of extra cash I've spent lately and included a loaner wet suit that didn't quite keep you from noticing that the sea lion pool was about 50 degrees. Maybe less. But still!

Mostly when I was growing up we went to these smaller parks because we didn't have a lot of money and so we did the rounds of places called Kiddieland and Adventureland (like that movie) and I have a series of memories of Tilt a Whirls and bumper cars and pony rides and tiny kid-sized boats that went round and round and water slides and roller coasters of various speeds and the occasional scary-ass thing like this one where you stood against a wall in this roundish contraption and then it sped up round and round and the eff-ing floor dropped out and it was only centrifugal force that kept you splayed against the wall for a few pee in your pants rotations. Maybe I made this up. I was like five and I'm sensing that the safety standards were lower then. Or maybe the adults in my world had lower standards.

Once my friend's mother took us to some small, creepy carnival place that had an actual freak show and somehow we were allowed to go into it and there was a fetus in a jar and a bearded lady and supposedly worse things but about ten minutes in, Becky's mother realized this was maybe NOT THE BEST IDEA and we left.

A few years ago in Mexico we went to an eco-theme park. Bat cave, the sign said. I was thrilled! Let's go I told the family! A bat cave! Disney-esque said my brain. It's gonna be bats behind plexi-glass and maybe an homage to the Bat Car. Ho ho said reality! This is going to be a stinky cave coated in bat guano and the thousand million bats on the ceiling are going to scare the pee out of you once your eyes adjust to the pitch black.

I love roller coasters. I love being scared, but not too much. I don't mind going upside down if I'm going real fast because physics and the safety bar tell me I won't slide out to my doom. I pretty much hate water parks except for the lazy river because it has the word LAZY in it and so you know what you're going to get. A sixty foot drop down some narrow chute into water of questionable sanitation levels is not my idea of fun. Ever. I can get behind the wave pool thing unless I'm in charge of a small child. Then it's less fun. I hate Ferris Wheels. Sorry Mr. Ferris. I hate being stuck up there with someone who wants to rock the car. Those freaking tea cups make me nauseous. Every. Time. I'm totally down with Pirates of the Caribbean and any other ride where there's animitronics (or however it's spelled) because WHY THE HELL NOT? Libba Bray's GOING BOVINE pretty much covers my love/hate relationship with It's a Small World. 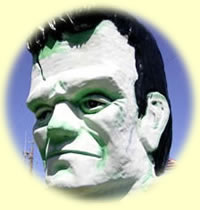 If you count miniature golf places as amusement parks then I LOVE THOSE! The weirder the hole decor the better. Par King in Chicago is like totally awesome. As is Novelty Golf, where you can hit a ball into Frankenstein's head. Because WHO DOESN'T WANT TO DO THAT?

If I think about it too hard, I know that Disney is aggressively artificial and too clean and too happy and that's not really China in Epcot in case you were wondering. (to pause for a moment of shameless self-promotion, this is the same-ish issue I have with Vegas and you can see the dark side of those thoughts as a sort of objective correlate in FINDING PARIS, out now from Balzer and Bray/Harper Collins.) Everything is, at the end of the day, fake. And there is something disturbing about our love of fake Eiffel Towers and fake New York skylines and fake everything. Even if princesses and ice cream are involved.

My own suburb sports a fake town center, made to look like the buildings have been here since 1930 instead of 1999 or whenever it was built. People stream here because it's SO AWESOME! And you can shop! And there's a Starbucks! And I try not to think about it too hard while I'm combing the sales at Eddie Bauer. 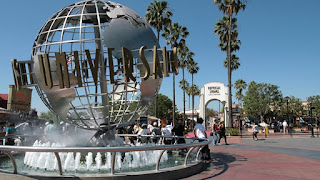 Still. When we went to my agent's wedding this past December, I was totally DELIGHTED that we stayed at Universal Studios!! Because it's Hollywood! And even the Burbank airport looks like a tiny theme park with planes.

Anyway. Amusement Parks.
What is your favorite?