I ask you: Why do people like to be flung around by massive hunks of metal at crazy speeds?

For most of my childhood, I lived aboard a sailboat with my dad, sister, and our crew, Jim. On our way to Costa Rica from Mexico, a storm came up just before we reached port, driving us out to sea with 100 mph winds and waves over twenty feet tall. When a particularly enormous wave broke over the boat, shooting water through our main hatch, I panicked. My dad, who was on deck at the time, heard my screams, and came running to check on my sister and me. She told him that nothing had happened. We were fine. So he went back on deck. For the two days it took for the storm to blow itself out, he and Jim struggled to keep control of our boat. By the end, they were utterly exhausted. We came close to sinking to the bottom of the ocean, but we survived. 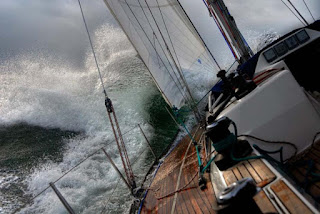 Nearly a year later, on my ninth birthday, we were living in a harbor in Key West. When a mobile carnival came into town, and I went to check it out with a friend from school. On the Twirly Tea Cup Ride, I panicked and screamed until the operator stopped the ride and let us off. Phew, that was a close one.

A after that, my dad, sister, and I (without crew) sailed across the Atlantic from the Canary Islands to Brazil. It took 33 days. Jody and I took watch together every night. One day lightning crashed all around us. On another, a squall took us by surprise and laid the boat on its side. I remember once when I was steering as the wind picked up and the waves grew steeper. The boat was rolling so violently that I had to wedge myself in and push against the tiller with my legs to maintain our course. I didn’t scream.

Since then, I’ve been on some rides at Disney Land and the Santa Cruz Boardwalk. They’re fun, but I don’t seek them out. Here’s my theory about amusement parks. Getting hurtled towards the sky or the ground simulates a near death experience without the risk, and that makes you feel more alive. But I don’t need that. I’m already permanently grateful not to be dead.
Posted by Lauren Bjorkman at 7:00 AM