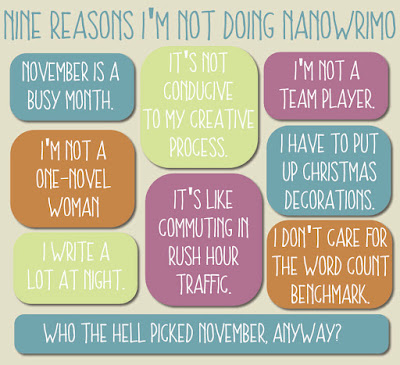 1. November is a busy month. For my "day job" November is hands down the busiest month of the year. We're talking crazy, sleep-deprivation busy. I don't have time to catch my breath let alone write a novel.

2. I'm not a team player. I'm a registered independent voter. I've never watched a single episode of Game of Thrones, The Bachelor or The Walking Dead. In fact, I literally had to Google popular TV series to come up with three shows for my list. I don't own a single garment of clothing emblazoned with a professional or collegiate sports team logo. So, the whole team aspect, encouraging-each-other-thing is a real turn-off for me.

3. It's not conducive to my creative process. I am a firm believer in outlining, but even so writing a novel in a straight up linear fashion doesn't work for me. I also feel that percolation helps writing, and this is where NaNoWriMo fails me. It takes some introspection to understand how the different scenes of a novel should play out, but there's no time for introspection when you're sprinting.

4. I'm not a one-novel woman. Look the idea of being able to work on only one novel at a time appeals to me, but it simply isn't how my brain works. I seldom read just one book at a time, and I certainly can't write just one at at time. I've heard people say that would be too confusing for them, but then they watch four or more television shows concurrently.

5. I have to put up the Christmas decorations. Right now. Today. Okay, this doesn't take all day, but a few hours. That's a lot in November. (See number 1 above.) I assume anyone that does NaNo has one of those houses that looks rather unfestive this time of year.

6. It's like commuting in rush hour traffic. I don't know about you, but I go to great lengths to avoid rush hour traffic. I'm self employed. If I have to drive somewhere I take steps to make sure I won't be driving during rush hour. When you do NaNo it's like entering the rat race. Come January agents and editors are going to be swamped with everyone's NaNo projects. So, there's something to be said for not being a team player.

7. I write a lot at night. I do most of my writing later in the evenings, before bed. That wouldn't seem like an issue except that here in the U.S. we have this absurd thing called Daylight Savings Time, which I loathe, and which comes to an end at the beginning of November when we can finally rejoin the rest of the world and live on standard time. Still shouldn't be a problem, right? Well, I have a dog and all this clock changing stuff is lost on him, plus he's old, so instead of getting to wake up at a reasonable 6:30 in the morning or maybe even 7 (a girl can dream, but not the sleep kind of dreaming because I've been rudely awakened by barking), at 5:30 in the morning I have to take my dog for a walk in the pitch dark, and what this means is that by 9 p.m. I'm struggling to keep my eyes open, which makes it difficult to write.

8. I don't care for the word count benchmark.  I understand the idea behind measuring your success by the number of words you've written, but it's fundamentally flawed. The goal with any written work is to exercise an economy of words, to tell your story in as few words as possible. So, why use word count to measure success?

9. Who the hell picked November, anyway? I mean I know we all do our own thing, and I know not everyone's as busy as I am in November, but isn't it still a pretty busy month for a lot of people? Could it be it was picked just because the first four letters of November are the same as the first four letters of novel? Because, if so, that was a really stupid reason. February would make the most sense, except it's generally only 28 days. So, how about March? What's happening in March? Absolutely nothing, that's what. Also the weather tends to suck for a good portion of the U.S. So, if I was going to pick a month to write a novel in, it would be March, but I probably won't for reasons I've outlined above.

Alissa Grosso took roughly ten years (take that, NaNoers!) to write her first book, Popular. She's also the author of the books Ferocity Summer and Shallow Pond, which took far less time, but still much longer than a month to complete. Learn more about her and her books at alissagrosso.com.
Posted by Alissa Grosso at 7:30 AM