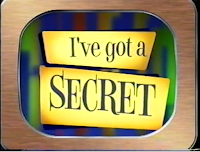 When I was a kid *number redacted* years ago, after school TV programming was limited. Our 21-inch, RCA Victor black & white television tuned in three network affiliates and four or five UHF stations, channels with grainy reception and a fondness for endless Three Stooges marathons (hey, YAOTL’ers, did I ever tell you about the time I met the Three Stooges? No? Well, that’s a blog post for another day!)

Turning on the boob tube after school in those days I’d find soap operas; reruns of the aforementioned Stooges; my favorite sitcoms Gilligan’s Island, Bewitched, and That Girl; and game shows. Lots and lots of game shows.

One of the most unusual and urbane of this game show crowd was I’ve Got A Secret, a CBS show that ran from 1952-1967 and then forever and ever in rerun heaven (and now ad infinitum on YouTube). The concept was a simple variation on Twenty Questions: while the clean-cut host moderated, four panelists, dressed as if they were about to testify before Congress, asked questions as they tried to guess the unknown-to-them contestant’s secret. They could only ask Yes or No questions. The contestant raked in the moolah for every “No” answer (20 bucks!). At the end of the round, the contestant revealed their secret (if it wasn’t guessed).

A lot of celebrities plugging a new book/movie/records appeared on the show, but so did many unknowns, who all had interesting and intriguing secrets (including a drummer named Pete Best whose tragic secret was he was booted from the Beatles two minutes before they hit the big time, and, in 1957, an elderly man who claimed to have witnessed Abraham Lincoln’s assassination).

Okay, that long-winded, somewhat serpentine introduction above is what brings me to this month’s theme at YA Outside the Lines: hiding secrets in your books – do you or don’t you?

I do, and I’m going to use I’ve Got A Secret to explain how.

Think of me, the writer of the story, as the host, my readers as the panel, and the story/characters as the contestant. The game the contestant and I play with the reader/panelists is designed to keep them guessing to the very end.

As I’ve noted before, I jump around in genres, but one thing consistent in my work is a mystery at the story’s core. So, this secrets thing can be double hard to maneuver, but also doubly rewarding when I’ve written something that makes both my characters and a reader go, Whoa, did NOT see that coming.

As the writer/host of this I’ve Got A (Fiction) Secret game, I play on two levels: the secrets my characters keep from each other (or others) and the ones the author keeps from the reader.

First, the secrets characters keep from each other (or others). These are a lot of fun to write. Secrets create conflict for the characters and a whole lot of tension for the reader, especially when they know the truth. The “secret baby” trope in romance is a perfect example of this. The reader knows the baby is the hero’s, but he doesn’t, keeping the reader guessing for a delicious 200-plus pages how and when he’ll find out.

In my Golden Heart-finalist YA manuscript, THE NASCENT BLOOM, the characters are attempting to escape a prison-like work farm. They fear being punished and their plot derailed if discovered, so they go to great lengths to keep their plans a secret, even to the point of infuriating and alienating their friends and allies.

The author keeping secrets is a bit trickier, as it’s not always a given the reader will pick up on the clues. My time travel BERYL BLUE, TIME COP's heroine, a 23-year-old contemporary woman, reminisces about her first visit to a library at the age of five. She says she remembers wearing gloves and patent-leather shoes. I’m hoping my reader will blink and go, patent-leather? In 2001? I don’t think so. What’s the real story? A secret to be revealed by the story’s conclusion.

And in my work in progress, KILROY WAS HERE, someone’s trying to kill the hero. I toss suspicion on one character while a couple others lurk on the periphery each time an attempt is made to bump off our hero. I’m pushing the reader into guessing the (attempted) murderer’s identity—is it the obvious suspect or one of the other barely-mentioned characters? If the reader falls for my clues and chooses the wrong suspect then, game over, I’ve done my job. 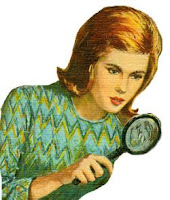 As a reader/panelist myself, I love to be the one ferreting out secrets and clues and trying to figure them out. Any author who feeds my addiction to secret-hunting has hooked me for life.

For example, I recently read a contemporary romance where the heroine and hero had a thing way back when and had just reconnected. When the heroine met up with the hero at the bar, he was talking to someone she couldn’t clearly see and who left as she entered the building. My secrets-loving-self latched onto that incident, even though the author had the heroine brush it off and forget about it. But I didn’t forget it and played a guessing game until the secret was revealed during the “black moment,” when we find out the hero had been talking to his new girlfriend!

The moment could just as easily have been nothing, but still deliberate on the author’s part, a red herring stuck in there to unsettle the reader and keep us guessing—and keep us reading.

That’s part of the I’ve Got A Secret game too, I guess, a game I’m ready, willing, and able to play.

Posted by Janet Raye Stevens at 5:30 AM