Strong Enough for a Man, But Made for a Woman (Brian Katcher) 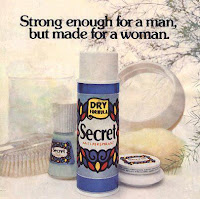 So when I was in high school, the whole backmasking paranoia was rampant. According to legend, if you were to play certain rock songs backward, you could hear Satanic voices telling you to do awful things. According to rumor, if you played Queen's 'Another One Bites the Dust' in reverse, you could hear the message SMOKE MARIJUANA. Once, during a quiz bowl tournament, a friend had rigged his Walkman to play cassettes backwards, and we were eager to see if the legend was true. Though he might have heard what he wanted to hear, my friend swore the words were there, and he began to repeat it: Yeah! Smoke marijuana! Smoke marijuana! Yeah!

He was unaware, due to his headphones, how loud he was being, and that he was screaming this loudly to a room full of nerds.

So are there secrets in books? Messages that the author inserted as inside jokes? There is historical evidence for this. For instance, F. Scott Fitzgerald's masterwork, The Great Gatsby, was originally titled The Cheap Bastards at the Power Company Can Suck My West Egg. Likewise, Dostoevsky's Crime and Punishment was originally called Still Too Good to Go to the Dance With Me Now, Maria Yupov? Who's a Loser Weirdo Now, Huh?

Fortunately, we have editors to prevent this sort of thing. But the more subtle jokes get through. For instance, in all my novels I include an author cameo. Nothing blindingly obvious, but like Hitchcock, I do like to wave at the audience. See if you can find me.

Also, I include a reference to the Holy Father Church, as part of my Faustian bargain to get published in the first place.

Finally, and I never noticed this until a friend pointed it out, most of my major male characters have two syllable names than end with N: Leon, Logan, Sherman, Clayton, Deacon, (and unpublished) Darren, Justin, Griffon, Brenden, Gordon, Deon, and Shannon.

Friend: Why do you supposed that is, Brian?

Also, every one of my novels is a metaphor for the Franco-Prussian War. I feel silly for pointing out something so obvious, but some people miss that.