Unless you're writing a memoir or non-fiction, I believe there should be secrets in every story you write. And I believe there are two kinds of secrets you'll find within the pages of a book.

I discovered these secrets by writing and then later talking to readers about
TOUCHING THE SURFACE. 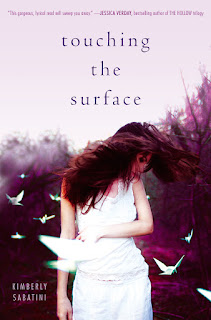 The first kind of secret comes from your own discoveries. These I might call SELF-SECRETS. If you're anything like me, you write to explore the things that pique your curiosity, the things you might be afraid of and the things you don't consciously let yourself think about--often because they make you feel vulnerable.

In TOUCHING THE SURFACE I wrote about death. And even though I was taking on the topic from a paranormal, young adult experience--make no mistakes--I was secretly writing about losing my Dad several years prior. I was processing all my thoughts and worries about what it means to die and what it means to live and be left behind.

In retrospect, I also found I'd secretly been writing about life-altering mistakes and my love-hate relationship with them. As a teen and sometimes even now, I find myself worrying about insurmountable wrong choices and about the concept of perfection. These topics are a big thread running through TTS.

Once my book was no longer in my hands and I was speaking to readers and students about my process and motivations--I could so clearly see the secrets I was uncovering within my writing. And what baffles me to this day is that I couldn't see the forest within the tree. I was completely unable to connect those dots until I'd put some distance and finality between myself and the project.

The second kind of secret is what I might call PROCESS SECRETS. These are the kind of secrets that develop from the collision of your personal experiences and your creativity.  It's the intersection between what you know and what you grow with your imagination. All of my characters and settings always start off using what I think of as a body double. I pick someone or someplace I know or know of and I use them to build the basis of a character or setting. It's a scaffolding tool for me.

But those characters and locations NEVER stay the people and places I start with. As I write and as the story takes on a life of its own, those characters and locations bend, twist, change and grow to be something completely different than that place holder I started with. But I can go back and tell you every person or place that was my starting point. But sometimes I keep my body doubles a secret because of this experience...

The character of Mel in TOUCHING THE SURFACE was connected to someone I knew who is a mentor for me in my real life. That mentor knew I was using her as a body double. But it was my first book and a lot of these secrets about the writing process were still secret to me.

As time went on, in my writing, I lost track of how and when the character of Mel became less my mentor and more her own unique character, until one day I was sitting with my mentor and realized she might think Mel's character arc was how I visualized her real-life "story" arc. I was a bit thrown askew by the revelation--surprised at how my characters moved from body doubles into independent people with their own journeys. The good news is that my mentor was aware of what I wasn't--she is a great mentor after all.

Now, what was once a secret for me has become part of my process. And I've let you in on the secret.

Posted by Kimberly Sabatini at 6:29 PM