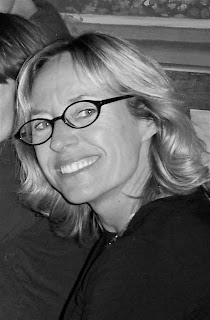 So thrilled to be a part of YA Outside the Lines. And to think, once upon a time I was scolded for coloring in such a manner (and for biting the fingers off my dolls, but ... I digress).
First off, I'm flattered to be included in this prestigious lineup of writers. A shout out to all the talented members of the group and a pledge to do my best to keep up.
With "outside the lines" as a suggested topic for our first post, I decided to write about the literary term high concept. High concept is used to describe an idea or angle that is fresh or unique. An orphan with a lightning bolt scar who is invited to a boarding school for wizards was, in its day, highly original.
If I were to attribute my "breakthrough" in publishing to one thing it would be purposely breaking out of the vamps and weres trend in the paranormal genre and inventing a new supernatural power. I mean, it's fiction, right? Not that there's anything wrong with vampires (except that whole suck-you-dead thing). I have enjoyed many of the post-Twilight Dracu-lores. It was, rather, that I felt there had to be infinitely more to explore in the things-that-go-bump-in-the-night field.
I was drawn to the angel angle (and not just as an anagram), because the concept of a spirit form has always intrigued me. When brainstorming a fresh take on the human soul, I thought of the before--rather than after--scenario. An episode of an Unsolved Mysteries TV show that had stuck with me for years came to mind. In this particular segment, a young boy told his mother that he had a pre-birth memory of hovering over the earth and choosing her. Wow! What a fascinating concept. I tweaked it by combining it with the symbolism of childbirth--the bundle-bearing stork--to invent my human Storks, women charged with the pairing of undecided souls with the right mother.
So the tagline for our blog is "pushing boundaries and writing from the heart." I personally like that we're all coming at writing YA with different approaches. My Stork trilogy is light fantasy with romance elements. Pushing what is traditionally considered boundaries? Probably not. Different? I hope so. And from the heart? Yes. Trusting that we're all curious about what comes before and after, I write beyond the confines of empirical knowledge.
So I'm thrilled to be included in an outside-the-lines community. Here's to the great unknown, skirting the (para)norm, blazing trails, and having a posse with which to do so. Let's ride.
Email Post