Comparing this year’s Thanksgiving celebration to the last two is indicative of how much my life has changed this year. Two years ago on Thanksgiving, I had an epic, toddler-style meltdown about an hour before we had to leave for my in-laws. I couldn’t find the sweater I wanted to wear. I was exhausted from bartending until 3 am the night before on the busiest bar (and most godawful, amateur-filled) bar night of the year. I’d gotten up after very little sleep (it’s hard to wind down after a busy night) to make Tofurkey and mashed potatoes and roasted veggies to schlep with me because I’m vegan, my husband’s vegetarian, but everyone else eats meat. I was going to have to leave Thanksgiving around 6:30 to go back to work. I seriously crawled back into bed, crying and begged, “Can’t we please just stay here and watch Mad Men until I have to go to work? PLEASE!” But people were expecting us and we had to go. “Someday,” I grumbled, “ someday we are going to have Thanksgiving just the two of us. It’s going to be all vegan, we’re going to eat on the couch, and I am not getting out of my pajamas.”

Last year we followed the usual routine. Work til 3 am, get up, cook, go to relatives, go back to work. I didn’t complain because I was so grateful that my elderly cat, Sid, who’d been very sick was having a decent day. I didn’t want to leave his side and part of me wishes that I hadn’t because he passed away three days later. Sid was my closest friend since I was a teenager. He helped me through my hardest times and accompanied me on life’s adventures. (If you want to read more about him, Rookie was kind enough to run my tribute to him on the anniversary of his death. Have tissue handy.) He’d been ill for a couple years. That plus my frustration with the state of my writing career had me in a seriously dark place. During Sid’s last hours, I promised him repeatedly that I would be brave enough to do what I knew I needed to do to make it better—I would move across the country to Seattle.

I’d held back from making this move partially because of Sid’s illness—I didn’t want to take him away from his vet—but largely because I am terrified of change. I knew I couldn’t continue being miserable just because it was safe though. I had to keep my promise and take a risk.

We drove across the country from Chicago to Seattle in the beginning of July and I’ve been celebrating ever since. Even though the physical move itself was stressful, I celebrated going on this incredible adventure with the love of my life: 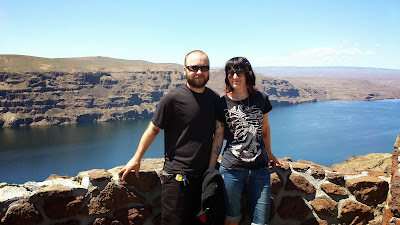 I celebrated our new apartment with its incredible view of Mount Rainer on clear days: 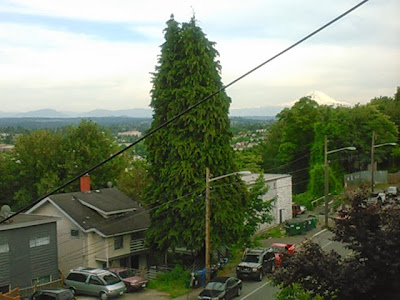 I celebrated what cloudy, rainy days can bring: 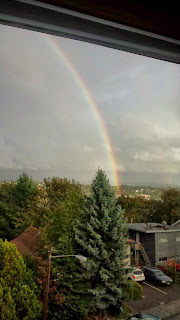 I celebrated my first grown-up furniture purchases: a kitchen table and a couch that are actually new, not just new to me. I also regularly celebrate that I have two healthy cats who love each other and love that new couch:

I celebrated meeting amazing new friends, reuniting with one of my best friends from high school who moved to Seattle years ago, hanging out with Seattle-based writer friends that I only used to spend time with online or at conferences. I miss my Chicago friends and family, but I love our regular texts, phone calls and video chats that keep us close. Also moving has meant getting like a card a week from my mom.

We celebrate the outdoors every Sunday with a new hike or walk. We’ve been all over Seattle, out east to the mountains, to towns north and south, and to Olympia, our fair capitol. I’ve taken too many pictures to choose one or two, but you can find them all on my tumblr.

Every Saturday morning, I celebrate a newfound love of running—something I always thought I hated. Amazing what a temperate climate and a gorgeous view can do to motivate you to run 4 miles on a regular basis:

I celebrate living in a city with tons of great vegan food. Vegan pizza, vegan cupcakes, vegan comfort/diner food, gourmet vegan dishes, awesome vegan nachos and sandwiches with sci-fi names? I can get all of these things easily at any time.

I celebrate living in a city with happy hour and NOT being in the service industry anymore.

I celebrated a new job. Full-time work with a salary and benefits, something I haven’t had in five years. I celebrated the fact that I was able to find this in a place that is still creative—the English Department of a local university, and even though it’s admin office work, I can dress how I want, don’t have to cover my tattoos, and can keep the funky streaks in my hair. I also adore the people I work with and share the values of the institution, which has a strong focus on social justice and the environment. I can walk to work in less than half an hour, though I usually take the bus in the mornings. I always thought I’d hate getting up at 6 am, but I don’t actually mind it at all. It probably helps that my mornings look like this:

I celebrated teaching three great classes this year. One at Columbia College Chicago before I moved, one online with MediaBistro, and one at a stellar organization for writers in Seattle called Hugo House.

I did finally celebrate Thanksgiving exactly how I wanted to. I stayed in my pajamas all day, cooked a giant vegan feast with my husband that was just for the two of us so we had leftovers for like a week, and we watched “Treksgiving,” an all-day Star Trek: The Next Generation marathon on BBC America.  Having so much just-the-two-of-us time with my husband is something I’ve really learned to treasure this year. And seriously, look at this food. I can’t wait to do it again for Christmas—after I get back from a trip to California to see a friend and the cousin I haven’t seen in ages, another perk of moving to the West Coast.

It would be neglectful not to mention that I did celebrate finishing a manuscript this year. The book, which I’ve been referring to as “The Grief Book” is definitely the best thing I’ve written so far. As of now, I still haven’t found a home for it or the adult book I finished two years ago. I am incredibly proud of it nonetheless and hope I will get to celebrate some writing success next year. This year did bring the publication of VerySuperstitious, a charity anthology about urban legends that I contributed a short story to. Rookie Yearbook Two, which features the essay I am most proud of, also came out in October and I was able to celebrate the release at an amazing all-ages venue in Seattle called the Vera Project. Right now, with my full-time job, and after five years of working nonstop, a new commitment to having time for myself, my friends, and especially my husband, writing for Rookie is just about all of the writing I’m doing. I feel a little bit guilty about that and maybe it will shift in 2014, but for now, I’m telling myself it’s okay because 2013 was exactly the year I needed it to be: A celebration of change and true happiness.