That Which Does Not Kill Us, Can Only Make Us Better Writers (Alissa Grosso)

I am an inconstant journaler. Many a year, I resolve at the start of the year to write a journal entry every day, and we're hitting the point of the year (it's January 18th, for the record) where that resolution usually goes down the drain. One thing I've noticed from years of keeping these inconstant journals is that the shittiest days often produce the longest journal entries. (Hey, that's a clever saying I should put that on a shirt.) 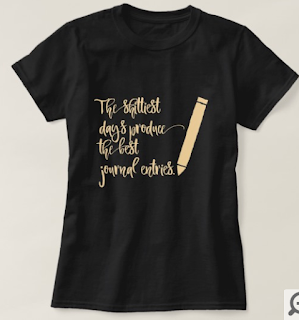 I guess as a writer, my way of dealing with crap is to write about it. Some people throw things, some people scream and shout, some people meditate. I write. What this means is that if I go back and look at past journals what I end up seeing is that things have been pretty awful and miserable for me. This doesn't really give an accurate picture of my life. I've always found it easier to write a scathing book review than one that's full of praise. When you don't like a book, it's easier to enumerate all it's flaws, but with a good one you don't want to nitpick and go through all the things that make it good. You just want to savor it's goodness and say this is a good book and leave it at that. It's pretty much the same with good days.  We want to savor good days and relive them again, but often this doesn't involve writing out every detail of what made a day so good. That kind of sucks the joy out of it.

Shit happens. (Hey, that's another good t-shirt, but I think that one may be already taken.) 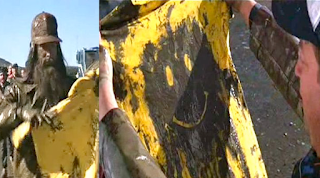 And the thing is that it happens to everyone. Even someone who seems like they lead a perfect, charmed life has faced down some ugly stuff at one time or another. All of us, everywhere have had things happen that we knew were the absolute worst things ever. Sometimes we wondered how we would ever survive, and yet somehow we did and left a whole mess of long, rambling journal entries in our wake. When I look back on those old journal entries sometimes I'm amazed at the stupid stuff I stressed about at one point or another, but other times I find myself transported back there for a few minutes, and I am grateful that I made it through alive.

I believe in the adage to "write what you know" up until a point. There's a lot of things that I think it's perfectly fine to make up. That said life experiences, even the bad ones can make our lives fuller and our writing more powerful. I often mine life experience for my own writing, and I think it's pretty safe to say that something like 99% of other writers do the same. To keep the stakes high in our fiction we have to put our characters through hell, so it helps if we've experienced some adversity in our lives.

Now, that said there's a notion that's been expressed (quite a bit of late) that suffering and misery produces great art, and I would like to call bullshit on that. (Sorry about all the "shit" in this blog post. It's got almost as much expletives as a journal entry written on a shitty day.) 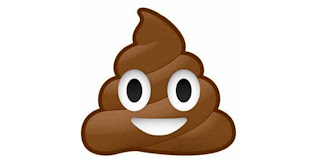 Misery doesn't produce art, artists produce art, and a miserable artist is not producing anything. They're just trying to survive. Misery produces journal entries, but journal entries are not art. Journal entries (at least the ones written on miserable days) are venting. Venting isn't art. Sure, maybe someday down the road you'll be able to mine your bad experiences for something that you can use in a work of art, but that's just like a little reward that you get for surviving. It's not your misery that has produced the art, it's you the artist who has produced it.

By the way, a note for those of you who do plan on culling your life experiences for creating works of fiction. If you include just one solitary detail that comes from your own life, your readers (particularly close family members who recognize said experience) will assume the entire work is autobiographical. Even if NOTHING else comes from your own life, even if the character doesn't look like you, or isn't even human, they're pretty much going to assume that you are writing straight-up autobiography. So, keep that in mind, if, say, you are writing a story about a deranged serial killer and you happen to give him a car that behaves in the same erratic manner as that piece of junk car you were driving ten years ago, there's going to be some people out there who assume that you are a deranged serial killer, or, at least, harbor murderous intentions.

So, maybe you're someone who is thinking if trial and tribulation can give us so much free material, shouldn't we voluntarily experience misery? For the sake of art, should we put ourselves in risky situations? No and no. Look, there's enough crap out there in the world, and you will experience your fair share of it. That's a promise. I'm sorry. Life is dangerous, life is ugly. It's your job to survive, and the easiest way to survive is to avoid as much bad stuff as you can. Like, I said, you aren't going to be able to avoid it all, but hopefully you survive. Vent to your journal, or throw things, or meditate. Then maybe someday a few years from now when you are at that point in your story where things are going a little too good for your character, hit them with a dose of misery straight from your own personal archives. Be prepared for the inevitable assumptions that you are writing a memoir and not a work of fiction, hell, vent about those assumptions to your journal if you need to, then move forward. That's all we can do when the worst happens, as it does from time to time.

So, if you are a writer I hope that the most dire situations you put your characters in, are ones that you've made up because you've never experienced anything that awful. And for those of you that are presently facing the worst, I hope that you can make it through and know that if you do, someday you might actually use your shitty experience for something good.

Okay, I have to go now because I have at least 3 days of journal entries to get caught up on.

Besides rambling journal entries and blog posts, Alissa Grosso writes books. She's the author of the YA novels Shallow Pond, Ferocity Summer and Popular, and for those of you that have assumed otherwise, none of them are autobiographical. You can find out more about her at alissagrosso.com.