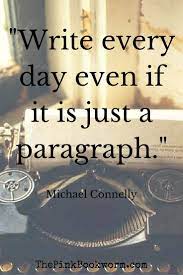 The most common writing advice that I really hate is to WRITE EVERY DAY. I feel like it is advice for men, not women. Definitely not moms. I can't count the number of times my writing time was crushed by a child's sudden illness, or even a teen's need to talk something out.

I guess I could have shooed my kids away and done that writing. But now that my daughters are grown I'm glad that I didn't.

I'm no longer a mom in the trenches (though now I rarely turn away a phone call from an adult daughter). Now I'm a care-giving daughter to aging parents. I can't count the number of times my writing time was crushed by a mom's sudden need, or even an aging mom's need to talk something out.

I guess I could have ignored my aging parents' needs. But now that my mother-in-law is gone, I'm glad that I didn't.

I HAVE written every day. I've won National Writing Month five times, writing every day of November. Life cooperated in those Novembers--my kids were thriving, parents doing okay. I had fun making Thanksgiving pies and getting my word counts done.

The thing about NOT writing every day is the thinking time. I've avoided a lot of writing problems by taking the time between writing sessions to think about what I've already written, what I plan to write. I think about my characters. How to fix weaknesses creeping into my WIP. All that thinking makes writing more efficient, maybe even better. I like giving my writing some breathing room. I like taking the pressure off myself to write every day.

I CAN write daily. I just think that my writing is better when I don't. Give yourself and your writing breathing room. That's my good advice.

But only if it works for YOU!

This month at YA Outside the Lines we’re talking about the worst writing advice we’ve ever received.

Even so, I’ve heard and seen some laughable advice over the years.

6. Don’t use semicolons, because they sound too educated.  Dude, I AM educated. I also use the Oxford comma, you ignorant twit.

5. Dumb it down for readers. An editor once sent me a letter filled with truly horrible advice ... and I promptly called a writer friend to read it to her, and we both shrieked with laughter. One comment by the editor: some readers wouldn’t “get” the fairytale and other “brainy” references I was making (in a modern retelling of Little Red Riding Hood), and I should strip out everything that ANY reader might not get. Oy. It’s called layering, baby. Everyone will understand my novels, but there will be nuggets in there (also known as Easter Eggs) for bright readers who pay attention. To paraphrase Molly Ringwald in Sixteen Candles, super readers LIVE for that shit. 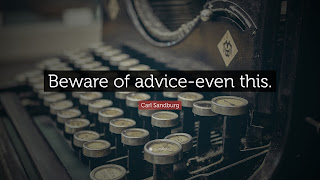 4. Don’t use adverbs. Yeah, well, I write YA. I totally use adverbs. Like, I use them practically all the unbelievably freaking time.

3. Read, read, read in your genre. Okay, I do read in my genre (which is mostly YA, sometimes romantic comedy), but only enough to know what’s happening in the market. But putting similar books into my head while I’m writing will screw up my writer’s voice. Years ago, when I was reading Bridget Jones’s Diary, my American characters suddenly started talking about shagging. Ooops! I immediately set Bridget aside until I’d finished writing my novel. I now mostly read English historicals set in the Regency period. Pure escape, and if I suddenly mention a rake or ninnyhammer or watering pot in my own novel, I know exactly where it came from. 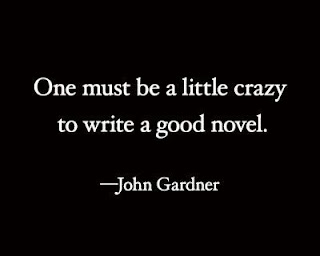 2. There’s only one way to do this. I avoid proselytizers, just like I try to avoid spelling the word “proselytize.” There are a million ways to do ANYTHING, and writing is no exception. Plotters want me (a pantser) to plot out my books before I start writing. (HA HA HA!) An amazing number of silly people care DEEPLY about whether or not there are two spaces after a period. (It’s called “global replace,” kid. End of issue.) And on and on. Do whatever you want. Write however you want. And then, if an editor wants you to change something (other than asking me to make my novels dumb for readers: HA HA HA!), consider EVERYTHING, then make the decision that works best for the book. Not for you or even for the editor, but for the book.

1. Years ago, when I was getting discouraged about writing novels that weren’t selling, someone told me it was EASY: I should just sell to her erotica publisher. Me: “But I don’t write erotica. Most of my novels don’t even have sex in them.” The answer: “No problem! Just add some random sex scenes to whatever you’ve already written. Throw them in anywhere.”

That has ALWAYS been my favorite piece of bad writing advice.