I was sorting out the closet where my old papers live, and I found a page I wrote when I was just starting to think about Wildwing. It was like going back in time (appropriate, since Wildwing is about a girl who escapes her rotten life by traveling back to the Middle Ages, where she's mistaken for the local lord's bride-to-be).

Here's how that early draft starts:

Ani draped the tablecloth, fresh and smelling of the iron, over one arm, reached for the unfamiliar jangle of keys, and strode down the hall toward the linen closet. Her steps slowed as she neared the door in the middle of the hallway, the one that was always locked. It was probably the little boy's room, she thought. He'd been two years old when he disappeared, her age. They'd searched the woods for weeks. That was thirteen years ago; the room must be thick with dust. Ani's fingers found a long black key. Herr von Hofen was so kind to her; not like the boys who muttered names under their breath, or their mothers who sneered as she walked by. This would be her secret gift. She'd scrub the room from top to bottom; maybe, somehow, it would lift some of the sorrow she saw in her eyes.

Here's how the book starts now:

It's the same old cobbled street through the same old town, but for once I barely smell the cakes from the tea shop, don't even pause to stare in the windows. I'm floating along, another me, in a dreamworld. Thanking God for sending a teacher so new, she hasn't learned yet that there are somebodies and nobodies in this town, and that I'm one of the nobodies. She's gone and made me the queen! I smile, remembering Caroline's horrified gasp. She's to be nursemaid in the play. Caroline, who tells the other girls not to talk to me, who pretends I don't exist if we're in the grocer's at the same time... 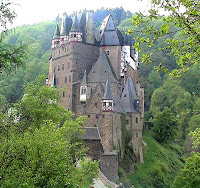 lot of changes. From Germany (where it started when I visited this castle) to England (better for research, language, and Middle Age politics). The scene in the hall moved to later in the book, to make the heroine's travails specific (that rotten Caroline). Nice old Herr von Hoffen became strange Mr. Greenwood. But while Ani's name changed to Addy, her core stayed much the same. There was an anger and resilience in her, a refusal to accept the crap that she was told to accept as her lot in life, that fueled the story from beginning to end. The changes amped that up.

I've been asked where/when I'd time-travel if I had my choice. Ancient Greece. Venice during the Renaissance. And about a hundred more. But until I open a door, like Addy, and find an old elevator turned time-machine, I'll settle for the mini-time-travels like this one: Seeing where the story started, looking back at the changes I made, and understanding why.
Email Post