BLOG TOUR GUEST POST: The Knife and the Butterfly excerpt and Ashley Hope Pérez on the things Azael carries 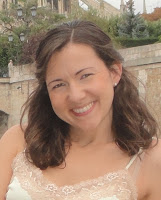 I’m psyched to be hanging outside the lines with you today on the official release date of my second YA novel, The Knife and the Butterfly. In a second, I’ll dish up an excerpt and give you the inside scoop. But first, here’s the synopsis to get you all oriented:

Azael Arevalo wishes he could remember how the fight ended. He knows his MS13 boys faced off with some punks from Crazy Crew. He can picture the bats, the bricks, the chains. A knife. But he can’t remember anything between that moment and when he woke behind bars. Azael knows jails, and something isn’t right about this lockup. No phone call. No lawyer. No news about his brother or his homies. The only thing they make him do is watch some white girl in some cell. Watch her and try to remember.

Lexi Allen would love to forget the fight, would love for it to disappear back into the Xanax fog it came from. And her mother and her lawyer hope she chooses not to remember too much about the brawl—at least when it’s time to testify. Lexi knows that there’s more at stake in her trial than her life alone, though. Azael needs the truth. The knife cut, but somehow it also connected.

Now for the excerpt, which comes from Chapter 5 of The Knife and the Butterfly:

I open the file. For now I decide that Eddie and my homies got away on foot, and I go back to reading.

- One gray Adidas backpack, marked on the front and back with tags linked to MS-13.

- one of a young girl, approximately age 8;

- one of a long-haired Hispanic teen female (“YR Becca Hottie” written on back);

- one of a group of eight boys, aged approximately 13–21, labeled “MIS VATOS” (see enclosure for photocopies).

- One sheet torn from National Geographic with the caption “sunset in the Sierra Madre of El Salvador.”

- One pair of socks.

- One can of Red Devil Delta Blue spray paint, half empty.

- A hardbound black sketchbook with stylized letters that spell out “AZZ’S PIECES.”

- A stick of Degree deodorant.

- Traces of marijuana found in bag.

It seems kind of sad all written out, like all you got to do is throw away my backpack and nobody’d know I was ever even around. That’s why I like to can. I tag and work up pieces to represent, but I also do it so that there’s part of me out there for everybody to see. Getting smoked out with my homies and then hitting the street until my cans run out, that’s what I call a day.

The downer is that some fool comes along and messes with your work, covering it up with their shit. Or punks from the city buff it. A couple of times they had a whole little army of volunteers out in the hood painting over and scrubbing out our writing like that’s some good deed. When they could be doing something real, like building a park or something.

Sometimes I work out a really fine piece on a wall somewhere, but when I come back a few days later it’s like I was never there. The fact is that you got to re-can the whole hood practically every week to keep your presence strong. Now that I’m not out there to tag up whatever I can reach, to turn trains into traveling masterpieces, how long before my name disappears?

Ever since I first read “The Things They Carried” by Tim O’Brien, I’ve made a point of thinking about what my characters carry, both literally and metaphorically. Usually, though, this is one of those “just for me” writer things I do. But since Azael has been incarcerated in The Knife and the Butterfly, I got my first chance to share the catalog of items with the reader directly.

For Azael, this is a sobering moment as he realizes (1) he doesn’t know where he is exactly or why he’s been arrested, (2) it wouldn’t be hard to make him disappear, and (3) based on his possessions, his existence doesn’t add up to much.

It’s easy to judge Azael, easy to dismiss him as a gangbanger and a good-for-nothing. But the more readers learn about his past, the more they realize that meaningful change is hard to come by in his world. Still, Azael will struggle to discover how he can make a lasting mark on the world around him—one that won’t be scrubbed out.

That’s a challenge that—if we’re honest—we can all relate to, no matter what we carry.

More about using what characters carry to develop your writing here.

Ask for The Knife and the Butterfly from your favorite local bookseller:

More interviews, excerpts, guest posts, and secrets (including two truths and a lie) coming throughout Ashley’s The Knife and the Butterfly blog tour. See the full tour schedule here. Tomorrow, more insights at Actin’ Up with Books, followed by an interview on Friday at The Happy Nappy Bookseller.


Ashley Hope Pérez is the author of two young adult novels, WHAT CAN'T WAIT and THE KNIFE AND THE BUTTERFLY. She also is a passionate teacher and student working on her PhD in comparative literature. At the moment, she lives in Paris with her husband and son where they enjoy culture, croissants, and cramped living quarters.