We Don't Need No Education by Patty Blount

It's September again -- Back to School season, so all this month, we're posting about teachers.

I've had my share of some bad ones, good ones, and ones whose names I can't remember. I've had teachers who pulled my hair and slapped my hand and sentenced me to unfair punishments. And I've had teachers who sent home glowing letters praising my efforts and achievements that made my mother burn up the phone lines for hours, calling all the grandparents.

What I DIDN'T have many of was cool teachers. You know, cool -- teachers who understood us, who knew what we were going through, dealing with, or putting up with.

I went to Catholic school from first through twelfth grades and it's difficult to think of any of the nuns as cool. But my sixth grade social studies teacher was cool. Of course, he wasn't a nun (laughs) so maybe that had something to do with it? Mr. Mele was awesome -- he was young enough to make history come alive and more importantly, make it matter. He used to do a test prep session he called The Grill, a classroom game show event in which he'd bet us one chocolate chip cookie what grade we'd get on the test. I studied hard for his class because nobody wanted to let down Mr. Mele. At the end of that term, he and his wife had their first baby and he missed some school. He brought the baby in and walked up and down each row so all of us could see where he'd been.

I named a character after Mr. Mele in SEND, my debut novel.

When I was in ninth grade, Mr. Stuart was the cool teacher. He also taught Social Studies. He skated into class on our first day of school that year -- literally skated in on giant disco skates with huge neon green rubber wheels and executed a perfect 360 and then told us to move our desks out of the neat rows and into spokes facing the center of the room. He was the teacher who taught us how to laugh at ourselves; that most things weren't nearly the big deal we thought they were at fourteen. It was in this class where I was expected to stand up and deliver my first oral report -- something that had paralyzed me in previous classes. Without Mr. Stuart to teach me it's okay to mess up and not have the world end, I might never have had the courage to let anybody read my work.

And in tenth grade, Mr. Callahan, my English teacher, spent fifteen minutes of class time one morning telling us all about the Pink Floyd concert he'd attended -- yes, this was when The Wall was released. He assigned us homework -- pick a favorite song and analyze it using a number of criteria ranging from rhythm and meter to metaphor. Mr. Callahan taught me that as long as it matters to you, it matters and that gave me the courage to ignore the people who would later say things like "Oh, you haven't written a real book yet?"

My eleventh grade English teacher, Brother George, assigned us to read Slaughterhouse 5. I only recently found this paper I'd forgotten about -- this was the first teacher who encouraged my writing endeavors. 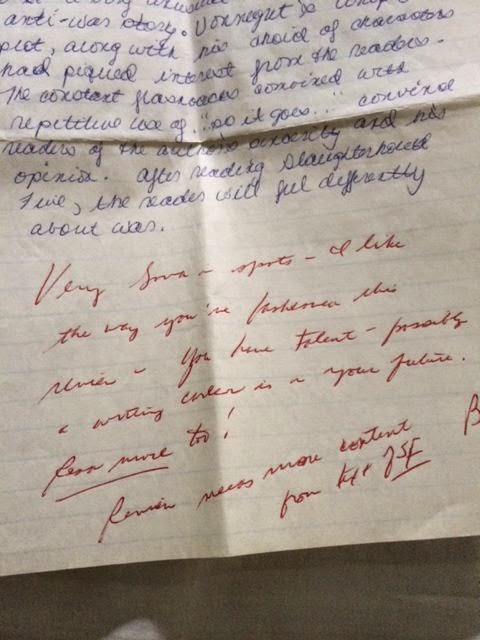 It's hard to make out, but part of the comment says "...you have talent  -- possibly a writing career in your future."

So to all the cool teachers out there who understood us and connected with us, thanks for the lessons you taught me that weren't in the text books. They've served me well.
Email Post
Labels: courage encouragement Pink Floyd Slaughterhouse 5