Why apocalyptically, you ask? I don't really know. You would think that I must have been some very dark and disturbed person to pick such a bleak sort of word as my favorite word. Why not rainbow or unicorn or something more bright and hopeful? I guess I did have a bit of a dark streak, and this was at a time when Winona Ryder was basically the teenage role model, and she was busy making movies like Beetlejuice, Heathers and Edward Scissorhands that tended to more apocalyptically cool then shiny happy rainbow cool.

Speaking of movies, I remember once reading the word apocalyptically in a short movie review in the newspaper and was so thrilled that I had to clip out the review and paste it into my journal so that I could save it forever and ever, and, in fact, it is still somewhere in storage in my attic, but I have to apologize for not taking the time to dig it out so that I could quote it verbatim. I can tell you that it was a review for a movie called Twister, no not the one with Helen Hunt and the flying cows. This was a way cooler and stranger movie with Crispin Glover and a bunch of colorful characters trapped in a house during a tornado. It's a brilliantly weird movie. You should watch it. Here's a trailer for it that I found on YouTube:


As this was in a time when the movies you saw were limited to what was playing at your local theater, was available in your local video store or happened to be aired on television, it would be years before I'd finally get to see Twister. I wasn't disappointed.

Anyway, with words it's not just what they mean but how they sound, and apocalyptically is a truly beautiful sounding word. J. R. R. Tolkien once wrote an essay titled "English and Welsh" in which he praised the phrase cellar door for how beautiful it sounded, and he wasn't the first. Apparently the phrase also appeared in a 1903 novel called Gee-Boy by Cyrus Lauron Hopper in a passage about someone who collected words for their beautiful sounds. Cellar door joining the likes of fanfare and pimpernel and Sphinx. In my humble opinion, apocalyptically sounds even better than all of those pretty words.

It was always my assumption that I would write the sorts of books where I would make use of the word apocalyptically on a regular basis. Then somewhere after I had abandoned 20 or so unfinished novels and completed a couple of more brutally (see what I did there!) awful ones, I read a book by one of my literary heroes. In Stephen King's On Writing there's a part where he rails against the use of adverbs, and it made me think back to my one-time favorite word. 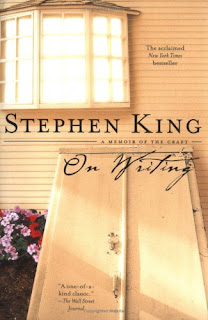 I had yet to write a book that required the use of the word apocalyptically, and now that the great master told me that it was a bad word that would make my writing amateurish and clunky, I might have to avoid it altogether. I'll admit, this made me a little sad. I still had fond feelings for good old apocalyptically, and I felt bad abandoning it.

The truth is, I still haven't written something where I found a use for my favorite word. It does not fit well in to many sentences. I apologize for the misleading title of this post, but I needed to shoehorn apocalyptically in there one way or another. That said, I still have a whole lot of books I want to write, and one of these days, despite Stephen King's command, I'm positive I'm going to get my favorite word into print.


Alissa Grosso has written three young adult novels that don't use the word apocalyptically even once. You can find out more about them and her at alissagrosso.com.