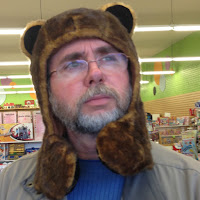 Greetings! New guy here. My name is Bill, and I write stuff. (That's me to the right: Bear Head Man). I’d like to open by thanking Patty and Holly for inviting me to join the team here at YA Outside the Lines. It’s an honor and a privilege to be included in such an amazing group.

And such a fun topic to start with! Words. Favorite words. Scary words. Words that make me cringe and words that make me grin. Mostly I love words, any words. They are our tools, after all, the foundation of our craft as writers.

But, for me, there’s one in particular that falls in the cringe category—and, no, it’s not “moist.” My cringing is is probably a tad ironic, since this word is always used as a term of unrestrained support for a book or story. It’s a word that means a book is a must-read, a book that will grip you and won’t let go unti you’ve turned the last page—if then. It’s—

I know, I know. Author sacrilege! But in my ear, it’s clunky and unlovely and feels oh so forced. And yet, I know I should love this word. Heck, if a reader described one of my books thusly, I’d absolutely shut my yap and be thrilled. But deep inside—and I can’t help this—I confess I’d wish they put it another way.

I suspect it’s one of those words that came about because it takes up a lot less space than “You won’t be able to put this book down!” If I’m a graphic designer tasked with placing a blurb on some cover art, unputdownable is assuredly easier to fit than an elegantly worded declaration full of dependent clauses and requiring multiple line breaks. I get it, I get it. Still.

Now, if we’re talking about words I like, well, you’re in for a long, long list. My gift to you in this, my inaugural post at YAOTL, is to not share them all. But there are a few honorable mentions, words I make a point of sneaking into almost every novel or story I write.

The first is more phrase than word, but I think it counts. Starting with my second book, “rainbows and unicorns” makes a regular appearance in my work—not an easy task when you write gritty, realist crime fiction. It started as a joke from my editor at the time, Alison Dasho. “I'd like to see you fit rainbows and unicorns into this noir procedural.”

When I was writing about a grizzled cop in his 50s, finding an appropriate spot for rainbows and unicorns was a genuine challenge. But it didn’t get any easier when I turned my attention to young adult. Joey Getchie, 16-year-old orphan and foster kid, isn’t the kind of fellow who frolicks through sun-dappled meadows made fresh by a cleansing rain. But I’m not one to wilt in the face of a charging unicorn, so even Joey has a run-in with a rainbow and hornéd equine or two.

Ultimately, the best writing is about the finding the right words for the situation at hand. In that way, unputdownable may not be my first choice, but it could still be the best choice. Rainbows and unicorns are fun, but I would never force them into a story if they simply didn’t make sense. Another favorite word of mine, fulvous, didn’t make it into Property of the State because the word didn’t work with the voice of my narrator. Joey Getchie would have given me the laser-powered side-eye if I tried to sneak fulvous into his vocabulary.

What’s great is the wealth of choice we have at our disposal as writers. Can’t abide by the word moist? Don’t let that dampen your spirits. The magic of language is it’s just dripping with alternatives. We just need to find the words that wet our particular whistle.