The Other Side of Rejection -- Maryanne Fantalis

This month we’re talking about rejection, and rather than reiterate how much it sucks to be rejected, I'd like to talk about the other side: doing the rejecting. As a reader, we get to say, "No way," to a book we don't like, but we don't think of it as rejection. For the space of this blog post, let's think about it that way.

Once, with a romance novel, the so-called hero made me extremely uncomfortable. Like so many romance novel leading men, he was muscle-bound and arrogant. Two strikes already, as far as I’m concerned. I mean, why would you want a guy like that?

Then, one morning, the heroine goes out into a field to look at some horses in her nightgown and robe (just go with it). He goes out of the house too, coming up behind her and touching her. He never speaks, never asks if he can. I’m not talking about putting his hands lightly on her shoulders or hips, or sliding a cozy arm around her in the old, “Hey, you must be cold” maneuver. That might have been a little romantic (or not; he is an arrogant jerk). No, he goes right for sexy-time. He has that “I-am-doing-this-and-you’ll-like-it” attitude. He never asks permission, just takes, because he's the man and he knows what she wants. And the heroine, timid and unsure, lets him.

More recently, I picked up one of those heart-warming books about healing and the power of love. I’m heading into the stressful last weeks of the semester, and I wanted something comfortable and easy. Plus, it was set in Colorado’s Rocky Mountains, near the Continental Divide. How could I go wrong, right?

Clearly, this author had never set foot in Colorado, much less ever lived here like her characters supposedly did.

How could I tell? Well, let’s start with the fact that the main character – I’ll call her MC – complains early in the book about how they had just endured a solid week of rain. In March.

Now, let me tell you, if it’s precipitating in March in Denver, it’s snowing.

Here’s a picture from the building my office is in, on the campus of the University of Colorado in Boulder, on April 6th, last Friday. 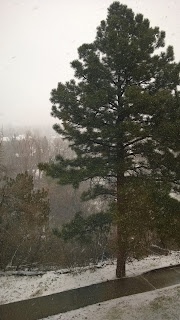 This morning, April 9th, I woke up to snow. Couldn't see across the street. By the time I got to work, it was sunny. That’s just how it works here.

If it ever rains for a week – in fact, if it rains for more than a day – we’re probably talking 100-year floods like we had in 2013. That’s the last time they closed the schools here along the Front Range, by the way. Not for snow, but for rain.

Then, when MC gets to her dad’s place up in the mountains – yes, still in March – she’s not wearing boots and slogging through the snow. No. She’s all excited about how she’s going to help dad plant his garden. In March. In the mountains.

Okay, again. Do you see that picture? That’s Boulder in April. We’re not even in the mountains. If it weren't for the snow, you'd see mountains in that picture. We’re in the foothills, at about 5600 feet. MC and her dad are supposed to live near the Continental Divide, up around 14,000 feet. For comparison, Trail Ridge Road in Rocky Mountain National Park, one of the highest paved roads in the United States, is completely closed from at least September to May every year because of the snow.

This is my kids on April 12, 2008, almost exactly the same day this blog post is being published. We were in Rocky Mountain National Park at the Alluvial Fan, approximately 8600 feet of elevation. Does this look like garden planting conditions to you? (Note the shorts in the snow. That's Colorado.) 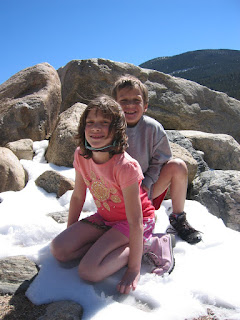 There’s no way you’re planting a garden in March, not in Boulder, and certainly not in the mountains near the Continental Divide.

The old adage around here is that you don’t plant until Mother’s Day. We can easily get a frost in May and snow in June.

This author did not understand the Rocky Mountains except as a stereotype.

The book wasn’t terrible. It wasn’t badly written. I didn’t hate it. But its lack of authentic, realistic detail killed it for me. If I lived anywhere else, I’m sure I wouldn't have noticed these issues. It would have served its purpose as a comfy read.

When an agent sends you a form rejection, when you get that email saying “your work just isn’t right for my list,” you crumple inside. You take it so personally. You think, “This agent hates me. My writing sucks. I am the worst writer ever.”

Sometimes, it's not about your writing at all. Maybe you wrote about something that made the reader uncomfortable. Maybe you reminded them of a bad incident from when they were young (#MeToo). Maybe you got all the details wrong about a place they live, a place love with all their heart. Or maybe you just caught them on a bad day.

Sometimes it’s not you. It’s them.

Posted by Maryanne Fantalis at 8:00 AM