Club 100: Getting Back in the Saddle - by Brenda Hiatt

I can think of few things more likely to make someone frequently consider throwing in the towel than attempting to make a career out of writing novels. Succeeding as a novelist is a long game. Because, let’s face it, novels are long. There may be a few phenoms out there who can write a book in a month or even a week (or so I’ve heard) but I have yet to hear about anyone ever writing an entire novel in a day.

Writing a novel (usually defined as a work of at least 40,000 words) takes dedicated time. Time with fingers on keyboard or pen in hand or microphone to mouth—though those last two methods still require transcribing at some point. Then that messy first draft has to be revised into some semblance of a real story, then polished to within an inch of its life, edited…you get the idea. Not something you can dash off in an afternoon.

But, as we all know, life has a way of getting in the way. The things that push writing to the side for an hour, a day, a week, a month, can be wonderful or awful. Weddings, new babies and cross-country moves to a better place/better job can be just as disruptive as unexpected illness and loss. Perseverance is about getting back to the writing every time life derails you, for whatever reason.

As an aside, I’ll just say here for anyone who might be thinking about writing as a career, that one of the very first things you need to succeed is joy in the process. This job is too damned hard if you don’t have that, because external rewards are never guaranteed (no matter what some self-proclaimed guru might claim). However, if you have that fire in your belly and writing makes you a whole lot happier than not writing... 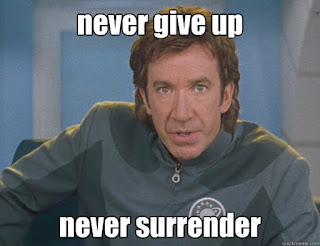 Anyway, back to the issue of persevering when life throws you curve balls—which it will. Over the years I’ve been pulled away from a regular writing schedule on many, many, many occasions. From the time I started writing “for real,” I think my record for going without writing at all was a little over a year. More often, I was only derailed for a few days or weeks at a time. However long it's been, it can be hard--really hard--to get back in the saddle when you’ve been out of it for a while. Here’s a tool that has helped me do just that, multiple times, and I share it here in hopes that it might help you, too.

It’s called Club 100. It was started by a group of writers online back in the dark ages before there was a real internet, just online services with electronic bulletin boards. One of those services was GEnie (so named because, I believe, it was owned by General Electric) and one of the boards was called RomEx, short for Romance Writers Exchange. One of the ongoing topics on that board was Club 100.

The premise is actually very simple. Every day that you manage to write 100 words—that’s right, just 100 words—you get to count that day. Most of us used stickers or stars on calendars to mark our progress. Once someone completed 100 writing days, we celebrated. The object is to get you working on your current book every single day, even when you don’t feel like it. Because, hey, anyone can write 100 words, right? It’s a couple of paragraphs. Takes 5 minutes. Thing is, once you’re back inside your story, you’ll find it’s very hard to stop at just 100 words. Many is the time I told myself, "Just five minutes before bed," and ended up with two or three new pages.

Since those old GEnie days, I’ve used the Club 100 technique to get myself “back in the saddle” more times than I can count. And it has always, always worked. Which is great, because nothing beats that awesome feeling of accomplishment that come from a great writing day! I know, because I’ve had a few of those recently and I’m feeling on top of the world as a result.
Sure, it won’t last. It never does. But I have a strategy to get back into that saddle the next time life knocks me sideways. No matter how many times it happens.

Brenda Hiatt is the author of the bestselling
Starstruck series of YA science fiction romance
novels. Last year she released The Girl From Mars,
book 5 in the series. After several life interruptions
(all good this time around!) she is currently hard
at work on book 6.