This month, we’re supposed to reflect back on this year’s intentions for ourselves that we laid out back in January.  With great trepidation, I just reread my January blog, which talked about my word for the year - DAUNTLESS - and my grand aspirations for 2018.


Or, as any number of my teen heroines might say, “Holy crap!”


It was a horrid year.  I could end this blog right on that note.


I won’t dwell on what went wrong, aside from pretty much everything.  Bottom line, my left knee has been wrecked all year and wasn’t fixed with my June knee surgery.  Every Single Step I Take Hurts.  (Significantly.)  I currently live a life without sports.  As a result, if you know me, it’s no exaggeration to say that I lead a grim life.


I write funny stuff, so I simply had to quit writing for many months.  (I’ve finally been back at it since late September, but I’m still ramping back up to normal at a Very Slow Pace.)  To try to salvage some fragment of my life, I did pour myself into music this year and, to a lesser but sometimes epic degree, songwriting.  I traveled to Greece and Norway (same trip) and songwriting camp in California.  I saw Harry Potter on Broadway.  (Fantastic.)  I heard a LOT of concerts and gigs.  I played four gigs.


If you think you know me, a little or a lot, you’re probably thinking “But she has a crazy-hectic life and seems to do EVERYTHING.  It must be FANTASTIC.”  Yeah, I hear that all the time.


The thing is, I retreat inside of myself when things go wrong.  Publicly, I tend to be annoyingly cheerful even when being hammered hard with every single step I take.  It’s how I roll.  What people don’t see is the extent to which I retreat into myself during the times that are repugnantly hard.  Like most of this year.


My word for 2018, DAUNTLESS, is written on a Post-It note on the door to my office.  I’ve spent most of this year alternately laughing or cringing whenever I see it.  I’ve been, in fact, daunted by this year.  It was hard.  I survived it, but I didn’t need another painful, “character-building” year in my life.  I’ve frankly had more than my share.


It’s ridiculously hard to write funny stuff when life isn’t funny.  I had to say “Suck it up, cupcake” a LOT this year.  But several friends told me I was still pretty funny for someone who’s so obviously in constant pain.  So maybe I have been a little bit dauntless in 2018.  Either that, or those friends should really cut back on their liquor.


But my word for 2019?  PARIS sounds pretty freaking amazing. 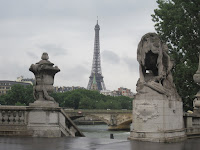 Mary Strand is the author of Pride, Prejudice, and Push-Up Bras and three other novels in the Bennet Sisters YA series. You can find out more about her at marystrand.com.
Email Post
Labels: dauntless goals Mary Strand word of the year