My personal line in the sand (Brenda Hiatt)

Alissa Grosso already discussed why “Young Adult” is a stupid label (it is) and Patty Blount talked about the disservice we do our readers (teen & adult) when we tell authors (and teens) that their books should stay inside the lines (I agree with her).

If there's one line I personally try not to cross in my own teen fiction,
that’s making my teen characters act and sound like adults instead of teens. Lately, I’ve heard this complaint a lot—that too much supposedly YA fiction is about teenaged characters whose thoughts, actions and situations bear no relationship to those of most teens, making them hard to relate to. Because a large portion of the YA market is actually made up of adults, I suspect that the books written for that market have slowly been changing to be more relatable to those adults rather than the teens who are their purported readership. Understandable, I suppose. In the indie ebook market, adult readers frequently make up three-quarters of the YA readership, sometimes more. So the temptation to angle the books toward them, instead of real teens, is strong.

I think it’s important to resist that temptation, and not because of some lofty “we must be true to our genre” ideal. It’s important because when we tilt our “teen” stories to appeal primarily to adult readers, we don’t just alienate our teen readers, we lose—or at least dilute—the very thing that attracts those adult readers to teen fiction. In other words, by trying to expand our market, we risk destroying it entirely.

Something else that’s being lost along the way are books aimed at younger teens, currently a terribly underserved market. The vast majority of YA books currently being published have main characters 16 and older, right on the verge of leaving high school (if they’re still in school at all). There are very, very few books out there that bridge the gap between MG (middle-grade) fiction, with characters in the 11-14 age range, and YA fiction. What’s a 13-year-old reader to do? She/he feels too old for fiction aimed at 5th-8th graders, but really isn’t ready to dive into “issue” books that deal with the challenges facing older teens. If those readers can’t find books that appeal to them, we risk losing them as readers entirely, which won’t help anyone! This is one big reason I’d love to see an overhaul of the classifications of books for teens. It’s also why my own teen fiction (so far) has been aimed squarely at that younger teen market.

And—guess what?—I just happen to have picked up an enthusiastic adult readership along the way!
When my Starstruck series begins, the main character is a young 15, just beginning her sophomore year of high school. Six books and a novella later, she’s jut halfway through her junior year and still hasn’t turned 17. Sure, she faces all kinds of larger-than-normal-life issues, but along the way she also deals with all the normal highs, lows and frustrations of high school. For me, it’s been important to keep these books grounded in the “real life” situations younger teens deal with (or look forward to), even as I spin rather more fantastical science fiction tales.

I also do my best to keep these books “clean” in the sense of language and situations, while still trying to keep things as realistic as possible. Sure, I know real teens swear and have sex. My characters know this, too, so those things might be alluded to in my books, but they don’t show up right on the page, where they might startle my younger readers (or their moms). I receive a surprising number of reviews and emails expressing appreciation for that forbearance, so there obviously is a need for stories like mine.

That said, I am in no way criticizing my fellow authors who choose to tackle more mature themes in their teen fiction, with language and descriptions that bring those themes vividly to life. In fact, I very much admire them. We need books that challenge us, that make us think outside the box and confront issues we’d prefer not to face. I’m certainly not advocating that all, or even most, teen books should be aimed for the younger teen market. I just want the teens caught in the middle to have plenty of age-appropriate reads as they mature their way to the older teen books. I’m doing my best to provide my share of those for their enjoyment. 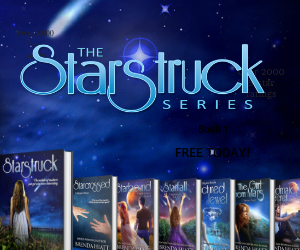