Today, we're breaking from regular blogging in order to take part in the blog tour for Stacy O'Neale's Shadow Prince:

Give us the elevator pitch of The Shadow Prince.

An exiled elemental fire prince has to decide if he’s willing to kill the air court princess to save his court.

What were the challenges of writing a novella?

The Shadow Prince is the only novella I’ve written. The rest of the books in the series are full-length novels. The only challenge is that you have to create an interesting story within a smaller amount of space. Writing, in general, is difficult.

Rowan faces quite a dilemma in The Shadow Prince. (Kill and take over as king, or stand up to his mother.) How did you come to this idea? What was the spark of inspiration?

In the Lord of the Rings trilogy, Aragorn wants to hide his true identity. He creates an alter-ego called Strider. As I was watching the movie version, I started to wonder what Strider would be like if he were a person separate from Aragorn. That one question eventually helped me create Rowan. I built the story around him.

How did you manage to balance inner conflict with outer action scenes?

They go hand-in-hand. Rowan’s inner conflict is played out through his relationship with his mother. You see early on that he has issues with abandonment, and a need to belong. The outer action scenes bring all of that conflict to the surface. The attempted escape scene is particularly compelling. All of the pain he’s worked so hard to bury comes spilling out. It was hard to write.

This book is intense! How does the tone, action level, etc. compare to the rest of the series?

What was your journey to being an author?

Long. 😊 I’ve always been an avid reader, but I didn’t start writing until I was pregnant with my daughter. Motherhood changed my life in a lot of ways. I eventually became a book blogger, which led to an internship with Entangled Publishing. I worked my way up through the ranks and left as a senior publicist. I was writing throughout those years and eventually realized that I wouldn’t be happy unless I wrote my own books.

What's your writing process? Pantser? Plotter? Something in-between? Any writing tips you can share?

Hardcore plotter. I write outlines, chapter-by-chapter breakdowns, and character charts before I write my first word. I’m a type-A personality. Plotting is the only way I can work.
What's your favorite passage or portion of The Shadow Prince?

What are you working on now?

The Mortal Enchantment Box Set releases on October 28th. I’m working on a new YA fantasy series. I’ve written the first book, but I need to work through the edits. I also have a couple of ideas bouncing around in my head. I need to outline them and figure out which one I’m going to write.

Where can we find you online? 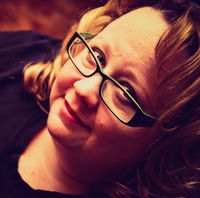 Everywhere. http://staceyoneale.com/ is probably the easiest way to find me. I’m also active on social media. All of those links are on the top right corner of my website. I also have my own book group on Facebook called Book Slayers. We mostly discuss fantasy, paranormal, and science fiction books in both YA and adult. https://www.facebook.com/groups/bookslayers/

***The 2019 updated edition of The Shadow Prince is available on Amazon for free. You can get your copy by clicking here: https://www.amazon.com/Shadow-Prince-Mortal-Enchantment-Book-ebook/dp/B00IT1DQX0 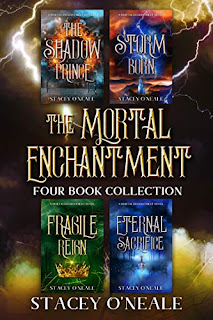