Like a few others here, I don’t have a side-hustle in the sense of something other than writing to pay the bills. Writing (and publishing what I write) is pretty much a full time job for me. But there are definitely other things I do with my life that help fuel my writing, in the sense of feeding the Muse.

Other than reading (don’t we all share that one?) some of my favorite things to do when I’m not writing include swimming, Taekwondo, hiking and traveling. Having a daughter in Germany has given me an excuse for quite a lot of those last two, especially since she’s one of my favorite travel/hiking buddies. Because I find walking and hiking very meditative, I’ve been known to plot scenes, chapters, and once an entire book while rambling along a deserted path in the woods or mountains.

Over the years I’ve hiked the Smokies, the Grand Canyon and seaside cliffs in Italy, but my most enduring memories are of walking portions of the Camino de Santiago in northern Spain. In 2010 I hiked the last 100+ kilometers of the Camino Francais (the “classic” Camino) with a group of about a dozen women, most of us (except my daughter) “of a certain age” and several of us writers. (One of those writers is right here on this blog!) 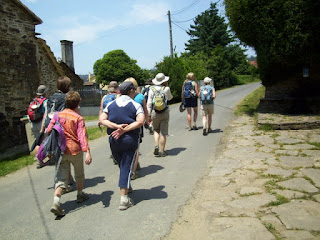 That trip and the self-discoveries I made along the way were so inspiring and beneficial for me that I returned to Spain for another Camino in 2015. This time it was the entire Camino Ingles, the route that English and Irish Pilgrims historically took to Santiago de Compostela and its historic cathedral. My daughter suggested that route, partly because our ancestry is primarily English and Irish. I had to agree it seemed fitting that we follow the same path our ancestors might have, centuries ago. She did most of the planning, and as she had most of that summer free, she started her Camino first, hiking much of the Camino Norte along the northern Spanish coast with her husband. The day he had to go back to work, I met up with her in Ferrol, in northeastern Spain, to begin our hike of The English Way. 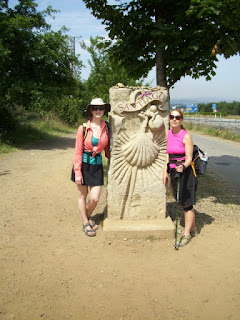 Before leaving for Spain, I had already begun to write Gallant Scoundrel, the fifth book in my (non-YA) Saint of Seven Dials historical romance series. While simultaneously researching both that book and my upcoming Camino, I discovered a remarkable bit of serendipity: much of my hero’s backstory during the Napoleonic Wars would have occurred right in that same region! In fact, I landed at the airport in La Coruna, the very site of an infamous battle between the British and Napoleon’s forces. While hiking, it was fun to imagine the countryside as it would have looked while my hero was there fighting in the war (1809-1812 or thereabouts). A few of my observations even made their way into the book! 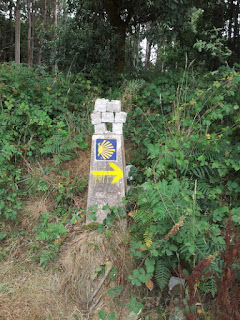 From Santiago my daughter and I continued on to Finisterre (“end of the Earth”), the traditional end of the Camino, where ancient Pilgrims would pluck a scallop shell from the beach to bring back as a sort of talisman and proof that they had completed their pilgrimage. We then hiked up to Mexia, a breathtaking rocky peninsula, where we meditated on all the lessons the Road had taught us.

Where to next? I don’t know, but she and I have discussed a walking trip in Ireland—which, coincidentally, is where some bits of my Starstruck books are set and where some of my characters hail from. Whether there or elsewhere, I very much hope my future holds many more rambling vacations on distant shores, since I always come back enriched and, I believe, a better writer for each experience.

PS - Happy Holidays and Peace on Earth to one and all!