Over on Twitter the past few weeks, Twilight has been trending once again as people began dissecting the foundation of the novel:

If you're a centuries old vampire, isn't high school the last place you'd be?

"We have to keep a low profile and blend in."

Do you really? Would anybody really care if a bunch of preternaturally beautiful people claimed they were home-schooled or graduated early?

That was exactly my take on high school. Once I graduated, I never wanted to go back. I skipped most of my reunions (my school does group reunions every year, with milestone years getting special invitations.) I have no real friends from high school but quite a few Facebook connections. There's no reason for me to go back there.

Or so I thought.

In 2019, my high school invited me to deliver the keynote speech at their National Honor Society Induction Ceremony. I was incredibly honored by this request and said yes. It was the first time I'd returned to the school in many years. It's worth noting this is a Catholic school.

First observation: People say things are smaller than you remember them to be. Nope. That auditorium was still huge and imposing. And it was packed. 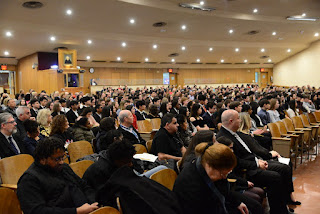 Second observation: I was delighted to see several same-sex couples openly holding hands in the corridors. I believe love is love is love and respect every human being's right to love who they choose.

When I attended the school, there were phone booths in the main corridor. The phones are long gone, but the booths themselves were converted to trophy cases.

We had a flight deck in my high school that was an after-school club run by one of our teachers. It was equipped with Commodore computers back in my day. Today, every classroom had more computing power than that entire room.

I had to wear academic robes. That was a hoot. 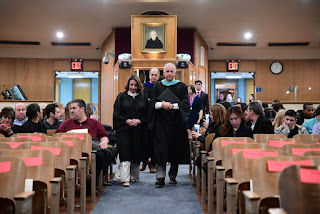 Best of all? Public speaking used to be a tremendous fear of mine. In fact, the man on the right in the image above is now Principal of my high school. When I was a student, he was the teacher who assigned us a speech project.
I...*takes deep breath*  Oh, boy. I crashed and burned in a spectacular way. I used the index card method to organize my main points. When my name was called, I walked to the head of the class and....
...dropped my note cards all over the floor.
As the class laughed at me, I hastily scooped up my cards, but they were hopelessly now out of order. I blanked on the speech and got a big ol' ZERO for the assignment that I had to repeat. I think I may have vomited a few times.
Time traveling a few decades, being asked to make another speech by the SAME TEACHER/NOW PRINCIPAL was a challenge I simply had to accept.
Reader, I NAILED it.
*takes victory lap*
My audience laughed at my jokes, applauded my success, and even hung around after the procession to ask some questions about my novels.
There was even an unexpected bonus -- in the front row, sitting directly in front of the podium from which I delivered my speech, I caught sight of a man who looked familiar. He looked very much like an old buddy's father.
It WAS him. And the old buddy was with him. Turns out my buddy's son was one of the honorees. We spent some time after the speech getting caught up.
My high school experience may not have been great, but conquering my fear of public speaking sure was.
Maybe those vampires were on to something?