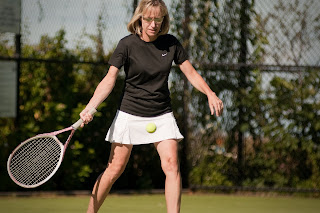 When I like something, I really like it, becoming—well—a little fixated. My late-in-life (at age 40, gasp) decision to write novels brought out his obsessive side in me. Tenacity served me well in the writing journey. It kept me at it, churning out novel after novel with no promise of publication.

In hindsight, I recognize a tandem personality trait that kept me on course: adaptability. I did not labor over a single manuscript. If forty agents (my personal line in the sand) passed on a project, I boxed it and moved on.

Tennis is another current compulsion of mine. I play doubles and have been registered on as many as three USTA teams simultaneously. About three years ago, I injured my right arm—yes, playing tennis—and have slowly and stubbornly fought my way back to the courts. I think a fair assessment of my game is that I’m not the most naturally talented player, but I put in my hours of practice, make an effort to learn from mistakes, and have a positive attitude. (Wait, did I just assess my tennis game or my writing? Hmmm.)

And then there’s the professional tour, which brings me to Wimbledon. As the child of English expatriates, I LOVE WIMBLEDON! I’m shamelessly addicted to its TV coverage. During the tournament, I have a rain-man-like ability to cite standings and a schadenfreude reaction to upsets. I will watch a top-name match live during the day and will later sit through the evening replay to hear it called by another channel’s commentators. (Yes, it’s an addiction.) I even have favorite commentators: John McEnroe and Brad Gilbert are as entertaining as the match itself.

And what kind of admitted tennis nut would I be without a favorite player? Roger Federer is, and has been for a long time, my idol. He’s a class act on and off the court.

All of the above—my writing, my own game, and Wimbledon—is coming to a head in the next couple of weeks. I have an August 15th deadline for book three (working title: Tide) in the Stork trilogy. Sigh. And gulp. I’ve just committed to a tri-level summer league. And the Wimbledon draws are out, and play begins on Monday. There aren’t sufficient hours in the next two weeks to do my obsessions and compulsions justice.

I’m counting on that flexible component of my personality to find a balance.

As a sidebar to this adaptability, I have—for the first time in YEARS—picked someone besides Federer to lift the cup at the end of the championship. Andy Murray, I believe your first major is achievable. (Sorry, Roger, I’m still a huge supporter. If it’s any consolation, your other biggest fan, my youngest son, may not speak to me for this mutiny.)

So wish me, Murray, and the many Wimbledon contenders luck in the coming two weeks. I often tweet about the tournament, so drop in @wendydelsol to hear a few highlights. If you’re a tennis fan, I’m providing a link to my Racquet Bracket pool; submit your picks against mine.

And have a great start of summer digging in to whatever it is that fuels you!