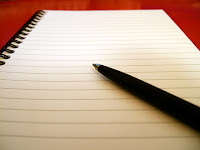 What's the first thing you need when starting a new story? Does it differ from project to project, or is it always the same for you? Do you begin with plot or setting or character? Do you rip an idea from a headline or an overheard conversation? Whatever else I begin with, I can't start a new story until I first find the voice of my protagonist.

In beginning my current work-in-progress, I knew that I'd be writing it in order to work through an overwhelm of emotions I'd been dealing with during a difficult time in my life. So I needed to find a character who could take on those feelings. For weeks I toyed with different YA voices, trying to see where I might take a story that would include the healing I needed to explore. And it wasn't working. Ultimately, I realized that for this particular story, I would need to go farther outside the YA lines than I'd ever been -- I'd need an adult MC.

At first, this idea terrified me, made me back away from the story altogether. I like being a YA author. I like the YA community. I didn't want to leave it behind. But as soon as I gave myself permission to think about writing my first women's fiction, the character came to me. And as soon as I let her in, her story poured out of me. So I guess I needed to write it. And although it took me a while to realize it, it doesn't mean I can't still write YA!

The initial steps of the WIP are done. The story is told. And I'm ready to start something new. Only I don't know what yet. So I'm waiting, filling the well, and listening, listening, listening for that first whisper -- the voice of the next character whose story wants to be told.
Posted by Cheryl Renee Herbsman at 7:00 AM