Years and Years of Firsts

The last year or so has given me a number of firsts, all of which lead me to believe I’m actually getting older, which is a notion I’ve completely disregarded my entire life (during which, I was constantly getting older).

There are great things about getting older: First, if you work hard at it, you start knowing yourself pretty well. I know, for instance, that there are certain things I shouldn’t keep in my house, unless I want to get sick. They include: cold pack cheese, wheat thins, and cigarettes (all of which I know are terrible for me, and yet some part of my psychology relishes downing pounds of the cheese and crackers while smoking the cigarettes). I very rarely eat crackers and cheese and I don’t smoke anymore. And, I feel better, but still know I have no power over crackers and cigarettes. That knowledge keeps me from purchasing them. Victory! 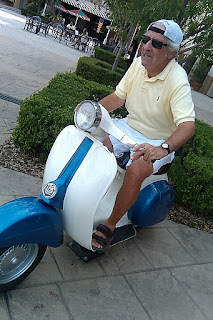 There are terrible things about getting older: First, you begin to lose the people you love. At the end of 2010 I lost my father. In 2011 I released my first book that my dad had never read in book form (he saw the manuscript of Stupid Fast and loved it). There was something so sad about going to my book release without my dad being there. In 2012, I’ll release my first book that my dad never saw.

Ageing: In 2011, for the first time, I had to acknowledge that my body is getting older. In order to utterly enjoy my friends, I stayed up really late on a trip late in 2011 (as I have often done in the past). The next morning I went to exercise (as I often have done after the late nights – trying to balance it all out) and, for the first time ever, I experienced muscle cramps while running on a treadmill and, for the first time, I fell off a treadmill. Some employee of the hotel saw this happen on video and came running up to the exercise room to ask if I was okay. I was not okay. I was seriously embarrassed (I also skinned my knee). Phillip Roth says that ageing is a massacre.

I have never enjoyed hiking. Even though I live in a small town, close to nature, I would not say my orientation is to the woods and marshes and mountains. I’ve always liked distinctly human places (big cities with lots of taxi cabs). In 2011, I climbed my first mountain. I did it with my fourteen-year-old son, Leo. We were in Arizona and it was hard, hard work. At the top, the sun blasted the crap out of us and it was so dang beautiful: small, desert ranges in the distance, red rock, green cactus, blue sky. You can’t have a fourteen-year-old son, unless you’ve lived a while. Having kids leads to all kinds of awesome firsts. We climbed a freaking mountain! 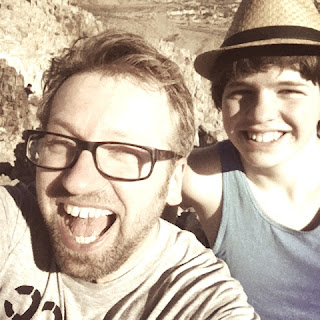 Happy first month of 2012. I wish you a hundred more and all the firsts – terrible and excellent – that will come to you.

Posted by Geoff Herbach at 7:28 AM