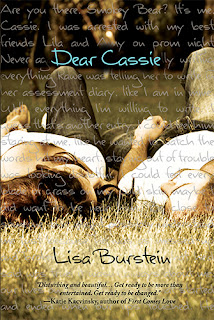 I have a new book coming out TOMORROW(!!!)- see the awesomeness above- so I think it's a perfect time to talk about how writing a new book creates a new beginning and how giving yourself the permission to write from a new beginning may be just what your work needs.

This book is a companion novel, so while some of the characters from my first book make an appearance, it was written from a completely different point of view character. This was freeing in a lot of ways, for a few reasons. See my debut novel was told in first-person by a girl who was very much like I was as a teenager. While I felt like I needed to write her story, it was hard to open myself up to what the story wanted to be because I was so focused on saying all the things I wanted to say about being a teen with low-self esteem. I think this is good, because it made the book very true, but I think it was also constraining because I felt like I had to write the book a certain way.

This was not the case with my second or third book and as a result, I could write the story the way it needed to be written, rather than what it felt like I should write. Both of these book have gotten and are getting better reviews and I really feel like this is why. I was less concerned on what I felt like I needed to say and more concerned about telling a good story.

It took me a few books to understand that this is our main job- "telling a good story".

So what does this mean to you as a writer?

Sometimes you need to allow yourself a new beginning. If what you're writing is not working, or feeling a little too close to your own experience, maybe you need to write from another characters point of view, or from third-person instead of first, or in present tense instead of past. With each new book, I was forced to create a new beginning for myself, but I've learned that sometimes a new beginning is just what your work needs.