Summer Love Is A Mix Tape

Summer love. Growing up, I had cinematic (i.e. corny) ideas about what it would be like when finally, finally, it happened to me.
It was Sandy and Danny singing about oh, those summer nights.
Jake Ryan leaning over a cake to kiss Sam on her sixteenth birthday.


George McFly and Lorraine at the “Enchantment Under the Sea” dance.
And let’s not forget Johnny Castle and Baby dirty dancing their way through the Catskills.


Despite my longing for moonlit walks on the beach, and midnight drives in a convertible Mustang, summer love, for me, was as elusive as the Loch Ness Monster, Big Foot, and Brigadoon combined.
Until one night in May, when I walked into a club, to see a band, and met a boy. He asked me what my favorite U2 song was. We traded numbers. He asked me out. Our first date was at the beach in June. For our one month anniversary in July he made me a mix tape. Jen’s Magical Mystery Mix. “Can’t Hardly Wait” by The Replacements was on it. I loved that song and all the rest he had chosen. For my birthday in August he made me another mix. This one featured The Church, The Pogues, and Counting Crows. More importantly, it was called Jen’s Magical Mystery Mix (Vol. II). I saw a pattern developing. One that signaled commitment. He was in it for the long haul. Yes, there was a Vol. III and when he got his first CD burner, the mix tapes became discs. Two years later, he proposed on the beach one August morning. As I sat there sipping my coffee. I thought he was going to ask me to share a section of the Sunday paper with him not the rest of his life. We got married the following Labor Day. For favors, we compiled a disc of our favorite songs and called it Our Wedding Album.


Yes, there were summer loves I wished for, but only one that mattered.
At eleven o’clock last night, I asked him to search through the boxes in our basement and find my magical mix tapes. He did. 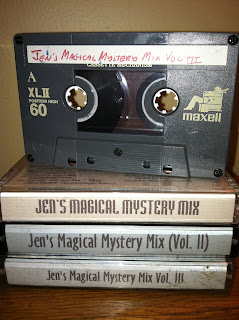