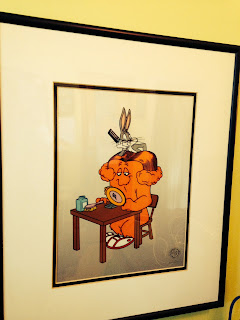 
Gossamer is also the monster in this picture. I love his ironic name and the episodes of Bugs Bunny in which my favorite monster appears. In my Hair-Raising Hare, Gossamer wants Bugs for his next meal. In Water, Water Every Hair, Gossamer’s evil scientist master wants Bugs’ brain for a robot. So what does Bugs do while being pursued by this hairy, orange bicuspid in tennis shoes? Run? Not Bugs. That crafty rabbit goes all stylist on Gossamer. “My stars, where did you get that awful hair do?” Bugs asks the monster. Then he sits Gossamer down and chats him up while he works. “In my business you meet so many interesting people, but the most interesting ones are the monsters.” I laughed today watching clips on YouTube, as Gossamer pried open bobby pins with his teeth and fed them to Bugs as he did an updo.
My sister knew I was a big fan of Bugs and Gossamer, so I never thought to ask her why she gave me this particular gift at that particular time, but she always was the smart one. It’s been hanging on my wall ever since, a constant reminder that good things happen when you quit running and give your monsters a makeover.
Email Post