Last year for my nephew's eleventh birthday I bought him an assortment of age appropriate games and toys. I think there was a couple of games, some remote control gizmo toy, a book and some candy. I also decided to round things out with one of those joke shop gag toys that I spent a whole dollar on, a package of fake dog poop. 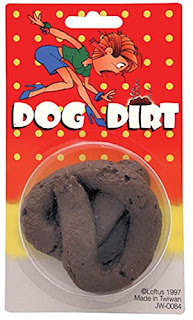 I'll let you guess which of these items turned out to be the biggest hit.

My sister posted on Facebook about the hours of fun my nephew was having with his fake dog poop, and a Thank You note I received from my nephew confirmed this. The short missive had two very enthusiastic sentences devoted to the fake poop, the other gifts having to make do with  being crammed together in a single short sentence.

The gift was a huge hit at home, at school and while hanging out with friends. Well, it was a big hit with my nephew, I'm not sure if his family, teacher and friends were quite as amused as he was. And unlike some gifts that are discarded soon after they are opened, the fake poop was still being used months later as reported by my mother when she had the pleasure of finding it strategically placed on the bathroom during a visit to my sister's house.

So, I put this out there for anyone stuck on what to get a boy who is about 11 years or so old. Sometimes the least expensive gifts are the most popular.

That said, my nephew's twelfth birthday is fast approaching, and if anyone has any suggestions on the perfect present for a 12-year-old boy, I'm all ears. I'm afraid I'm going to have a hard time topping the fake dog poop.

When not cleaning up genuine dog poop, Alissa Grosso can be found writing young adult novels. You can find out more about them and her at alissagrosso.com.

Posted by Alissa Grosso at 9:24 AM