In-Season Fruit, Hoodies in July, the Cubs and the Endless Promise of Summer (Joy Preble) 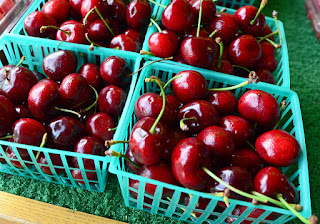 Growing up in Chicago, summer was the often elusive promise of warmer weather. Winter lasts a looooong time in the Windy City, with snow sometimes lingering in shady corners of the Forest Preserves until well in May. More than once there’s a legit blizzard in April, making even Spring feel like a product of your hopeful imagination.

But eventually summer would come when I was a kid and it would be glorious. We didn’t end school until late June, starting up again after Labor Day, but still it felt like an endless holiday—even if some years we had to bundle up in hoodies to watch the Fourth of July fireworks.  Summer was camp and free time and swimming and biking for hours. It meant Cubs’ home games because we lived in walking distance from Wrigley Field. Of course, like that April blizzard even after it had already warmed up in March, being a Cubs fan holds its own elusive set of promises. But as we say, there's always next year.

Summer meant – and still means—cherries and plums and apricots and watermelon and blueberries. We’d eat Michigan black cherries by the handful. Even now as an adult in a world where my local grocery store has access to a wide variety of fruits all year long, I prefer in-season fruit. I know I can eat cherries from South America in the winter, but there is something really glorious about waiting. I live in Texas now and Texas blueberries are in great abundance as I type this, far juicier than the ones that flew here from another continent back in February.

Barbara Kingsolver writes quite articulately and passionately about her family’s experiment with eating local in Animal, Vegetable, Miracle, quite an interesting non-fiction book.

Now, here in Texas, summer is a different beast in some regards. It is warm to hot much of the year and honestly, in Houston, we wait anxiously for October the same way I used to wait for June. When I was teaching, summer brought freedom from the bag of papers to be graded and lessons to be planned, the bag that never quite emptied until that last day. It meant a quieter rhythm and small trips here and there and afternoons at the pool with my son and his friends. It still means many of those things, but since I work from home now, writing full time and teaching more freelance, the lines are a bit blurred.

Honestly? I miss it.

I won’t lie; Autumn is my favorite season.
But summer promises that, too.