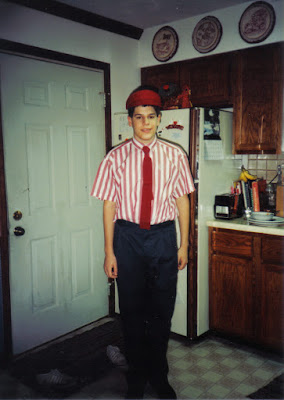 First of all, I want to remind everyone that as a teacher, I get summers off, and as an author, I don't have to teach summer school. Just wanted to let you know that. Neener, neener.

But there was a time when summer meant work. Before I started teaching the citizens of tomorrow, I paid into Social Security.

Advantages: They really didn't expect a lot of me. Cheap meals. Free ketchup.

Disadvantages: Seeing how the food was prepared inspired me to bring food from home. Grease burns. The uniform pants had no pockets.

Memory: Eating at Taco Bell in my uniform

Advantages: Great job for lazy people like me, I could find a quiet corner and daydream, forging the surveys later.

Disadvantages: We were the lepers of the mall, avoided by all. The creeping sensation that I contributed nothing to society. The hideous knowledge that there are people out there--adult, well-paid people--who stress about television commercials.

Memory: When we did food surveys and got to gorge on the free salsa and cookies.

Advantages: Somewhat of a macho job. Got to run big machinery. No dress code.

Disadvantage: As a temp, I got bad hours and lower pay. Molten plastic burns like napalm.

Advantages: None. None whatsoever.

Disadvantages: What goes around, comes around, Brian. Poor job market in the summer.

Memory: An actual tornado hit the city while I was teaching.

Disadvantages: I realized just how clumsy I am. This was also the only job where I had to pee in a cup.

Memory: A customer asked me to test out a bed to see if I thought it was comfortable. Then my boss walked in and thought I was napping.

And there you have it. Well, it's 11:00 AM on a Tuesday, let's see what Ellen is wearing today! Did I mention I don't have to work?