Your book was so cute -- Jen Doktorski

F***.  It’s happening again.
That’s what I’ve been thinking all month as I’ve been reading and enjoying everyone’s blog posts about criticism of the YA genre.


In high school I was the human litmus test for parent-approved activities. Whenever my friends asked if they could go to a party, or the mall, or anywhere that may or may not have had the potential for the kind of trouble teens tended to get in to, their parents always asked the same thing.
“Is Jen going?”


A “yes” answered earned them a stamp of approval.
In additional to being practically invisible, I was the good girl in high school. The Jiminy Cricket on my friends’ shoulders who would reel things in before they got out of control. And now I fear too many of my high school experiences have crept into my characters and my writing. I have to say, I'm questioning, in a good way, whether or not I've been holding back instead pushing boundaries.


I want some hate mail dammit. (That’s right, I said “dammit.”)
I want my books to be banned.

I want to get uninvited to a school visit due to explicit content in my novels.


I don’t want my books to be the good girls of YA fiction. It’s not what I intended. Granted, the first novel I wrote, Famous Last Words, which was the second one published, was all about a girl who was tired of being so straight edge. But in How My Summer Went up in Flames, the main character, Rosie, is served with a restraining order for setting her ex-boyfriend’s car on fire. She then goes on a road trip with three guys to stay out of trouble while she awaits her court date. Here’s some of the criticism I received about that novel.
I don’t believe her parents would let her travel cross country with three guys.
She was shopping at Macy’s? I thought her parents were having a tough time financially.
I don’t believe her parents would have let her keep her cell phone.
The worst one of all?
Your book was so cute.
Hello, people! She set her ex-boyfriend’s car on fire. On fire. Oh, and I’d like to add that she and her friend tried on sunglasses at Macy’s, they never purchased anything. Additionally, all the above criticism came from adults.
This month How My Summer Went up in Flames comes out in Hungary. Here’s a peek at the cover of the Hungarian edition. 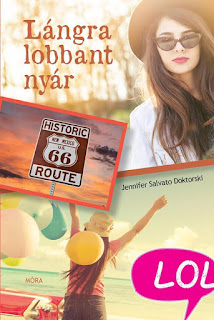 I’m happy that Rosie, Matty, Logan, and Spencer will be introduced to a whole new audience. Maybe my writing will seem edgier in translation. If not, there’s always the next book.

Posted by Jen Doktorski at 7:26 AM