I’m a big fan of the bittersweet ending. Here is one of my all-time favorites.

But after a year marked by more “bitter” than “sweet” – Carrie Fisher and Debbie Reynolds, really 2016, really?! – I’ve decided that in real life, I much prefer the happy ending. The only problem is, while 2016 is most definitely ending, in my opinion, there's no “happy” on the horizon. No cowboys riding off into the sunset. No kiss in the rain.
What’s even more disturbing is that 2016 doesn’t feel like a standalone novel or film. It feels like it’s part of a series. A very long series. As I sat in the darkened movie theater two nights ago watching Rogue One, I couldn’t help but wonder, Where are we in the Star Wars timeline?

Are we at the end of Episode III when Anakin becomes Darth Vader?

Are we in between A New Hope and The Empire Strikes Back? 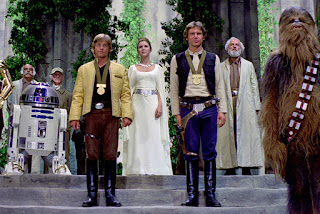 Or maybe we’re in Tolkien territory. The Two Towers perhaps.
When the sun rises on 2017 tomorrow, I’ll be sipping my coffee and contemplating how many pages will need to be written before we find that happy ending. I’ll also be considering what my role is going to be in writing it.


Here’s to the power of hope, words, and new beginnings.
Email Post