On Writing Your Way Through by Jody Casella

She wrote weird stories when she was a kid.

Stories about children who were crippled. Stories about children being run over by cars and one story where a little girl was attacked by a bear. She filled notebooks with the beginnings of stories, folded over stacks of pages to look like books, drew crude crayon drawings. Scribbled in diaries. Wrote poems. Song lyrics. Lists. Plays.

When she was thirteen she got a typewriter for Christmas and taught herself to type with two fingers, typing out more stories, two finished books, diaries, stories commissioned by friends, stories that won contests and praise, and one time, condemnation, in school. Stories she never showed anyone.

She filled an entire trunk with words.

The only way out is through, Robert Frost said, and she wanted to believe that, writing her way through her broken world by writing it, over and over, the same story really, the same questions at the core.

Why do people hurt the ones they love.
How do we survive pain and grief and loss and betrayal and trauma.
How do we mend together the pieces of our broken selves.
Can we?

stories about broken children living in a broken world. And then one day, she found herself on the other side, still gathering pieces but fitting some of them together. She told her story to others and she listened to their stories. And she found that while the world was still broken and the people in it were broken too, they were all in it together

and maybe that is the message (or maybe it isn't)

But because it is her story, she has decided 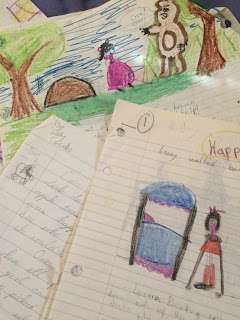 Email Post
Labels: power in story-telling why I write