You’ve probably heard the puzzler in which you’re a prisoner faced with two doors protected by two guards. One door leads to freedom, and the other to death. One guard always tells the truth, the other always lies. You have to choose a door to go through, and to guide your choice you get to pose one, and only one, question.

So what do you ask, and to whom? 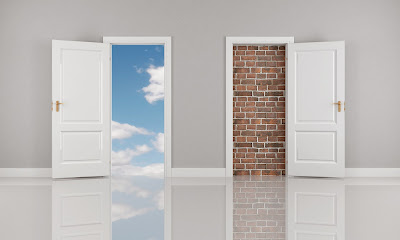 At its core, this is a logic problem—one with many variations. You can actually reduce it to symbols to solve it (see below for one possible solution). But because of the way the puzzle is often presented — the guards, their integrity, freedom vs. death — it seems to be about human nature. Get to talking about it with your friends, and the conversation can quickly become about their views of human nature.

“Does the dishonest guard always have to lie? Or do they get to choose?”

“That honest guard is such a goody-goody.”

“Do they outright lie, or is more about being deceptive? How subtle can they be?”

“If they always lie, isn’t that just a different kind of truthfulness?”

The puzzle is also about the problem of choice and consequence. There’s an implied backstory. Why are you a prisoner, and what did you do that warrants a possible death sentence? Or did you do anything at all? Are you guilty, innocent, or somewhere in between? Perhaps you were unjustly imprisoned. And how do these guards feel about their jobs? Are they pawns, or willing actors? Are they tools of justice, or tyranny?

Superficially, of course, we may think of the honest guard as “good” and the dishonest guard as “bad.” But when you start noodling even that, it’s not so simple. Given the choice they’re offering, deceit doesn’t necessarily mean always dooming a prisoner to death. And always telling the truth doesn’t guarantee freedom for even an innocent prisoner. If subtlety and nuance in their responses are allowed, a dishonest answer could be crafted to point to freedom. And honesty can be manipulated for nefarious ends.

Now, I admit I’m piling a lot onto what’s a straightforward logic puzzle, but that gets to the heart of why I write. I’m always asking myself Why? and What if? The answers to those questions lead to story. What if the honest guard really doesn’t like the prisoner, but is still constrained by his honesty? What if the dishonest guard really hates his job, but needs the money? What if the prisoner is actually guilty of some horrific crime, and if allowed to go free will commit more heinous acts?

Exploring these kinds of ideas, especially when it comes to situations which seem on their surface to be fairly straightforward, is what brings me to the keyboard each day. I want to know why, and I like to wonder what if, and when faced with a puzzle, I like to see what happens when I tinker with the settings.


To solve the logic puzzle itself, you have to strip away all the variables which may be the product of human foible. The prisoner’s guilt or innocence is irrelevant, and the honesty or dishonesty is perfect and complete.

Given that, one solution is to ask either guard, “Which door would other guard say leads to freedom?” It doesn’t matter to whom you pose the question. The honest guard knows the other would lie and indicate the door leading to death, so that’s the door he points to. The dishonest guard knows the honest guard would indicate the door to freedom, but since he always lies he’d also point at the door leading to death. In both cases, you go through the door not indicated and you’re free.
Email Post