I Still Have All My Fingers (Bill Cameron) 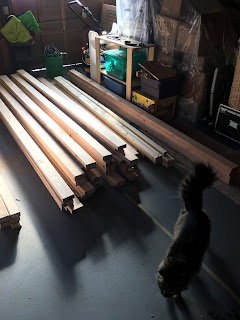 About a month ago, I ordered the lumber in the picture to the right. A couple of guys dropped it off in my garage, and then I was faced with a problem.

The problem was turning that raw lumber into a home for four chickens, a place that would be roomy, safe, and secure. Solving this problem would require not only the use of power tools, but the ability to think spatially and multiple steps ahead—and especially it would require a skilled, steady hand.

In short, it was a job for a carpenter, something I most assuredly am not.

And yet, somehow, as of yesterday, the combined chicken coop/run has reached about 80% completion—far enough along that our four pullets (aged 7 and 8 weeks) can now spend their days in the run portion. (I cheated and included TWO pictures in this post so you can see how things look as of today.) The coop proper remains to be completed, but I can see the end now. And, most amazing, I still have all my fingers.

So what does this have to do with power—aside from the aforementioned power tools? For me, this whole project has been about overcoming my feelings of inadequacy and powerlessness in the face of a complex problem. It's about taking on a challenge that has often felt beyond me, and then figuring out what I needed to do to succeed. It's been about the responsibility I feel toward the four living creatures we have taken into our care. It's been about pushing myself to learn and grow, and then to feel pride when I've been successful.

That pile of lumber represents a moment when I felt powerless, and yet refused to let that stop me. It hasn't been easy, and I haven't done it alone. My wife has been involved from the beginning, helping with a variety of tasks and talking me down when my anxiety or frustration threatened to get the better of me.

And I have definitely had some frustrating moments. The structure isn't exactly an original design, but based on several coops I've seen online, most particularly the Bluegrass Coop. The world of DIY Chicken Coops is rich and varied and often quite creative. As with so many communities, urban chicken people are eager to share their often hard-won knowledge. Yet while I've gotten invaluable information from many posts I've read about other coop projects, there's a difference between a blog post with photos and actual plans. That difference is where my lack of carpentry skill and experience has faced its greatest challenges.

I've had to draw up my own plan and work out my own materials list. I usually miss something critical, which means I have to go back to the home improvement stores over and over. At my nearby Lowe's, they've seen me so much the staff often asks how the coop is coming.

The point of all this is that sometimes we feel powerless, but if we grapple with the problem head-on, we may find a way to feel powerful. I'm still far from calling myself a carpenter, but I'm more experienced and more skilled than I was a month ago. I've learned I can take on a scary project and find my way through it. Sure, there's more work to be done—some pretty complex—but I'm not anxious the way I was when that pile of lumber was first delivered. I know it will be difficult, and I may make mistakes. But I also know I can do it.