Skip to main content
Posted by Brian Katcher May 29, 2017

Polka Your Eyes Out (Brian Katcher) 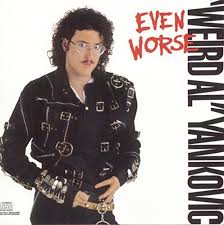 I cannot stand noise while I am writing. The TV, the radio, whatever, they all distract me. And don't get me started about the old man with the hideous eye. Unlike a lot of my colleagues, music does not help my creative process.

Not that music does not play a major role in my life. My tastes have always run to the eclectic. While I was in high school, rap and heavy metal were at their zenith. Meanwhile, I'm mooching around the 'spoken word' and 'miscellaneous' bins at the music store (remember music stores?). Being a Zager and Evans fan in 1992 at least made me a non conformist, and insured that my fourteen-year-old sister wouldn't ask me to drive her somewhere as often.

But there was one man who always stood out in my cassette collection (remember cassettes?).

Imagine it's the height of Michael Jackson's popularity. Imagine that you've written a parody of his biggest hit, as told from the point of view of a frustrated father whose son will not eat his dinner.

Imagine writing a fan letter to the King of Pop and he responds, helping jump start your comedy music career.

Yes, "Weird Al." The parody master. The brain behind such hits as 'My Bologna,' 'Mr. Frump in the Iron Lung,' and 'Amish Paradise.'

I once asked fellow writer Obert Skye how he was allowed to legally to say the words 'Harry Potter' in his Creature in My Closet series. I figured he'd get Avada Kedavra'ed for that. But he informed me that copyright law protects parody and satire. I think we have Mr. Yankovic and MAD Magazine to thank for this.

I was introduced to Al's music in elementary school. And I have to admit, I was inspired enough to create my own parodies when I was in junior high. While I wisely shared them with no one, it occurs to me that this was my first attempt at creative writing.

Baring my soul, here are the titles of my only attempt at musical creativity, circa 1988:

There you have it. Like many other miscreants, I owe my creative genesis to the accordion master.

And now I must go back to my chambers and work in silence.

God, that old man's heartbeat! It's enough to drive a guy mad...