The stories that sucked me in—and still do (Brenda Hiatt)

As I’ve mentioned previously here at YA Outside the Lines, I didn’t start out writing young adult fiction. Well, okay, the very first thing I ever attempted to publish might qualify—a short story I titled “Cedric the Sedentary Centaur,” written more or less in the style of The Hobbit, by J.R.R. Tolkien, which I submitted to a few magazines. But my first 15 published books were all historical romance, not YA. Various books and authors inspired me in that genre (Jane Austen, Charlotte Brönte, Sylvia Thorpe) but to trace how I got hooked into YA writing, I need to look further back, then skip ahead a few years.

Like most authors, I was a voracious reader from childhood. In elementary school, I devoured the Black Stallion series, the Misty of Chincoteague series and pretty much every other animal-themed book my school library had on the shelves. In middle school (jr. high back then), I’m sure I contributed greatly to the Scholastic book club’s success with the number of books I ordered from them. A fair number of those books were teen romances, with a smattering of fantasy and science fiction. Then came my gothic phase, consuming every book I could find by Mary Stewart and Phyllis A. Whitney, among others.

Then, after high school, I discovered historical romance, where I lived as a reader, then a writer, for many years. Back in March, I blogged about how I burned out in that genre a decade or so ago, and how YA fiction resurrected me as a writer. During that burnout period, I simply wanted to read for fun, not as a writer. That prompted me to pick up the first Harry Potter book, then other recently-published middle-grade and teen fiction: the Percy Jackson books, the Twilight series, the Hunger Games series and more. 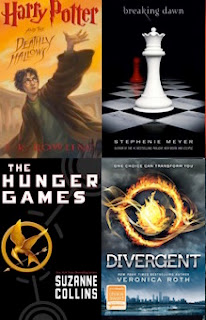 As I’d hoped, those books brought back my temporarily-dormant love of words, story and (finally) writing. The world-building in some of those books blew me away and I was further energized by the intense emotions all those not-quite-adult characters experienced. (No one can yearn like than a teenager!) Somewhere along the way, my own inner teen woke up. She began whispering to me at odd moments, reminding me of a story idea I’d played with years before but set aside because it wasn’t historical romance. It was, however, a perfect “what if?” setup for a teen novel—the kind of book I’d been enjoying so much recently. Back when I taught writing classes, I constantly told students, “Write what you read, write what you love.” Time to take my own advice!

I reread the YA books I’d most enjoyed, this time analytically. I also rewatched a few longtime favorite movies and TV series, like Star Wars and Buffy the Vampire Slayer. Why did I love this particular book, movie or show so much? What story elements and character types resonated most with me?

Those questions and their answers informed my own writing when I finally put pen to paper (okay, fingers to keyboard) again. Like Harry Potter and Luke Skywalker, my main character in Starstruck is an orphan, raised by a family where she doesn’t fit in. Like Katniss and Buffy, she discovers inner resources and strengths no one suspected, including her. Like Harry, Luke, Frodo (in the Lord of the Rings trilogy), Mia (in The Princess Diaries), Buffy, and numerous others, she has a larger-than-life destiny she can’t ignore—at least, not without dire consequences for everyone she cares about.

Life-altering secrets revealed, high stakes, losers who become winners against all odds—those story ingredients tend to push my personal buttons, so I wanted to incorporate them into my own writing. Toss in a romance written in the stars that transcends all obstacles and voila! Starstruck was born.

My original “what if?” became a four series (originally planned as a trilogy, but oh, well) that I wrote and published over the next two years. Then I used my renewed writing mojo to write and publish a historical romance my readers had been requesting for literally years. As my Starstruck series gathered steam, more and more readers started begging for more books in that world—and I was missing it, too. I wrote a “bridge” novella, Fractured Jewel, to tie up a few loose ends and to set up a spin-off series, incorporating both new and existing characters and their stories. The Girl From Mars released last summer and I’m currently finishing up revisions on The Handmaid’s Secret, set to release this October.

I plan to write another historical before my next YA, and I’ll again make a point of reading both new books and rereading a few favorites in the genre I’m about to write. For me, part of what keeps my writing juices flowing is revisiting the stories—and themes—that sucked me into this reading/writing thing in the first place!

Watch for The Handmaid’s Secret in October 2018!
Email Post