What Gets You Started? by Maryanne Fantalis

I've been reading through the previous posts this month, in which YAOTL authors talk about the books and movies that inspired them to write YA fiction, and it made me think about how inspiring fiction can be to those of us who write fiction.

When I was really little, I wrote tiny pencil and crayon stories that were usually concerned with animals. I loved animals, so my mom would read me stories about animals. At one time, I know my mom still had some of them in her house: for example, a little half page in pencil about twin horses named Brownie and Half-and-Half (one was brown, and one was black and white, if you couldn't guess).

As I got older and moved past reading and writing stories about mice (inspired, of course, by E.B. White and George Selden), bunnies (Robert Lawson), horses (Marguerite Henry) and dogs (Albert Payson Terhune, Jack London), I got into those classic teen mysteries: Nancy Drew, the Hardy Boys, and Trixie Belden. Once I had a taste of those mysteries, I consumed them like junk food. And, of course, I had to write some. I wanted to be Trixie's best friend: the rich, pretty Honey Wheeler, with golden-brown hair (hence, "honey") and who spent most of her life at boarding schools and sleep-away camps. This was my suburban Long Island idea of a glamorous life. And I specifically remember writing my character's age in these stories as "thirteen" which was the age I aspired to. Also, I had the perfect name for my rich, glamorous character: "Thirteen year old Amber Grey..."

Oh boy, I was young.

As I've mentioned before in this blog, my best friend Lynn and I rewrote the ENTIRE SHOW of the original Battlestar Galactica when we were in sixth and seventh grade, putting ourselves into the story. That's a piece of my early writing I still proudly (and cringingly) possess.

My point is, we are inspired by what we love. I know a lot of people make fun of fan fiction and the writers who create it. I am grateful, now, that my horrid early writing is NOT on the internet to be reviewed by anyone and everyone, especially because I have decided to pursue a career as a published author. But for those who enjoy a novel or a film so much that they want to write within another writer's created world? There is no harm in that, only joy and a kind of reverence. Most of it isn't good enough for publication, but most of it isn't meant for publication. It's just meant for the enjoyment of the writer herself and anyone who might choose to read it if she gets the courage to post it on a forum. Are you going to take that away from her?

It doesn't matter what gets you writing. Even if you feel like you're copying something when you get started... you know what? Maybe that's what you need for inspiration, for learning your craft, for your beginning. From there, you can fly.

By the way, this post is coming to you under a "chickee" on the beach in Aruba. Because, you know, an author's life is a tough one, but someone's got to do it. 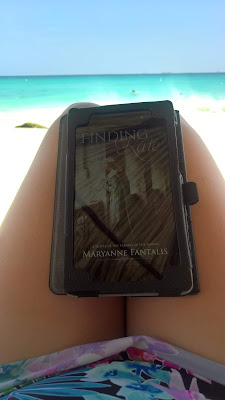