Some books change your mind, others reveal it...by Patty Blount

You may have heard me say this before but I do publish under my real name. "Blount" is alphabetically close to "Blume" and Judy Blume is a writing idol of mine.

I used to dream of someday having a book on the same shelf as hers. Then it actually happened. 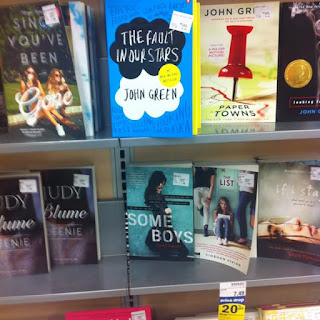 You can see my own SOME BOYS right next to Deenie. Deenie was the first Judy Blume book I'd ever read and it helped prepare me to face a scary physical problem of my own when I was about 12 -- scoliosis.

But the book that changed everything for me was Forever.

This book is famous! Er, well infamous, really. In my Catholic elementary school, we'd been warned not to read this novel because it contained actual, real life/up close and personal SEX.

When you're 12 years old, sex is something dirty and distasteful that married women must endure if they want to have children. Worse, you'd get a disease or get pregnant. Even worse than that, your life would be ruined. And even worse than that, you'd burn in hell! I always suspected the dire warnings against sex were greatly exaggerated. After all, people were still having babies. If sex was so terrible, wouldn't the birth rate drop?

So the more my teachers said NOT to read Forever, the more everyone did, even though it was obvious that anybody actually having sex outside of marriage was *gasp* NOT a good girl.

Despite these warnings, the book became a sort of underground best-seller. My classmates would whisper about Ralph and giggle. (Spoiler Alert: Ralph is an important character in Forever, but he's not a person. He's an....appendage.) I heard them discussing Katherine and Michael, the book's main characters, the way they discussed real people...dissecting their relationship and imagining themselves in the characters' places.

Here's the thing...Katherine did not seem like a bad person to me. In fact, she seemed pretty cool.

So, I read Forever. I bought my own copy with babysitting money and covered up the cover with Con-tact Paper.

Oh my God, the guilt! It was so enormous, it practically had a pulse. Would I burn in hell for reading 'trash?' Would I be expelled?

The book was amazing. It was the most REAL book I'd ever read. Characters talked about things like periods and bleeding, about condoms, about coming, about virginity and losing it, about sex, about love. The story not only contradicted everything I'd been taught about sex being dirty and distasteful and something to endure, it illuminated these things as the lies adults tell kids to keep them from having sex because...yes. There are risks, so many risks. Pregnancy, disease... those are covered in this book, too.

The warnings, the outrage, the pearl-clutching over this book was, in my 12-year-old mind, completely unfounded. I learned so much from this novel and not just about the mechanics of sex, but about the responsibility. Sex is good, especially when it's shared by people in love. The book helped me decide to wait close to seven years before I tried it and yes, I was in love.

Ever since reading it, I've been an outspoken opponent against book-banning. Books like Forever and like my own novels are best when they're read by teens and parents together, so they can spark important conversations that dispel misconceptions (like women don't feel pleasure during sex) and harmful inaccuracies (like you can't get pregnant during your period). Best of all, book talks can help parents impart their own values to teens.

Forever didn't just change my mind; it changed my life. This is the book that made me want to write AND write YA.

Did you learn about sex in a book? Tell me which one in the comments.