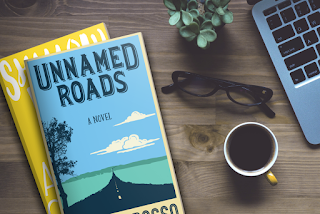 I don't know that I have a favorite among all the protagonists that I've written. I like them all in different ways, but when it comes to the secondary characters I do have a clear favorite, and her name is Grandma Honey.

Honey Armstrong is the grandmother and primary caregiver of Petra Armstrong the protagonist of my YA novel Unnamed Roads. Not unlike her granddaughter, Honey is smart and sassy, but she's so much more than that.

Her primary occupation is entering and winning sweepstakes, which makes her wonderfully eccentric. It's also how she's able to finance her granddaughter's cross-country quest to finally meet her mother.

But like any good character, Grandma Honey has her flaws as well. She's made some mistakes along the way, which is why when her granddaughter seems hellbent on getting some boy she barely knows to drive her from her home in NJ to Omaha, Nebraska, Honey agrees, provided she comes along for the ride as well.

During the road trip Grandma Honey gets to provide comic relief as well as serve as the voice of reason. I hope readers have as much fun getting to know her as I did creating her.

Honey isn't based on anyone I know or have ever met, but like just about every character I've created she does have some things in common with real life folks. I, like Honey Armstrong, have won an orange juice mug and loathe coconut. And that scene where Grandma Honey forgets that the reading glasses she's wearing aren't the ones on a chain? Yeah, that's based on a real-life incident. But for the most part her personality is pure fabrication.

Even though I made her up, she's one of those imaginary people that I think it would be fun to hang out with. I'd love hearing her stories about her latest sweepstakes wins while we enjoy some candy bars that aren't filled with coconut or wander around a thrift shop together looking for things we can resell online.

Alissa Grosso is the author of Unnamed Roads as well as six more books for teens and adults. Find out more about her and her books at alissagrosso.com.
Posted by Alissa Grosso at 8:00 AM