Characters that make themselves “favorites” by Brenda Hiatt

One advantage to writing my blog post late in the month is getting to see how the other authors handled that month’s topic before deciding what angle to take. As several people pointed out, asking an author to choose a favorite character is a lot like asking a mother to choose a favorite from among her children—which is why a few chose to focus on secondary rather than main characters.

I wrote the first book of my Starstruck series completely from the heroine’s viewpoint, since the story was mostly her journey. I originally thought I’d do the whole series that way, but in book 2, Starcrossed, the hero’s journey was almost as important as hers, so I felt compelled to give him a few viewpoint chapters in that book. (In present tense, which I’d never written before, but which he insisted on, no matter how many times I tried to “fix” it back to past tense!) Once I’d done that, I decided to write a short story exclusively from his viewpoint, as a giftie to my newsletter subscribers. (BTW, anyone can get Rigel’s Jewel by subscribing: https://brendahiatt.com/subscribe )

In Starcrossed, newcomer Sean was the main antagonist (if not quite a villain), scheming to steal M (my heroine) away from her soulmate, Rigel. While writing that book, I got to know Sean’s inner workings pretty well. So well that in book 3, Starbound, I decided to give Sean his own viewpoint in several chapters, to let readers in on his thought process and motivations. In the process, I made him a tortured sort of hero in his own right, though the primary story arc was still M’s. His transformation continued in Starfall, book 4. That book was again mostly in M’s POV, though this time with a middle section in Rigel’s viewpoint that sort of paralleled the first few chapters of Starstruck. (That was so much fun to write!)

After the sacrifices Sean made in books 3 and 4, it bothered me a lot that even though he was now thoroughly redeemed for his misguided efforts in book 2, he was left hanging without a happy ending at what I expected to be the end of the series. Fortunately, enough readers asked for more books that after a brief hiatus I decided to continue the series. After a “bridge” novella (Fractured Jewel), I decided to give Sean his own story with The Girl From Mars. In that book, he’s forced to confront everything he grew up believing when he’s faced with a heroine who challenges all of his assumptions.

Molly, Sean’s sister, was another significant secondary character in Starcrossed, Starbound, Starfall and The Girl from Mars. As she and M became closer and closer friends (after some early conflict), I/we learned more about the push-pull of her life as a girl born into an “inferior” class but raised by a high-ranking family. So in The Handmaid’s Secret, I finally gave Molly her own story (and happy ending) too, exploring her dynamics and giving her a hero worthy of her—though of course he had to earn that!

The next book in the series, which I’m currently writing, will require all three couples to work together to conquer the challenges coming their way—which means all six of the characters I’ve developed will have story arcs that will come to some kind of satisfying conclusion. That means I’m still working out how to balance everyone’s viewpoints, since it’s feeling like more of an “ensemble” book than the previous installments. It’ll be a challenge, so stay tuned! 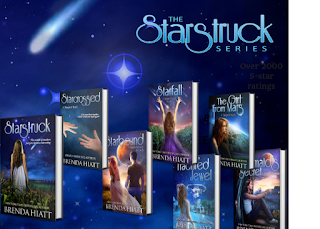